Margrethe I Valdemarsdotter was a member of the aristocracy in Europe.

Margaret I, 1353–1412, queen of Denmark, Norway, and Sweden, daughter of Waldemar IV of Denmark. She was married (1363) to King Haakon VI of Norway, son of Magnus VII of Norway and Sweden. At the death (1375) of her father, her son Olaf became king of Denmark under the regency of his parents. As Haakon was occupied in Norway, Margaret actually wielded the power in Denmark. The death (1380) of Haakon made Olaf king of Norway as Olaf V, and Margaret became regent. She continued to press her late husband's claim to Sweden, and she styled her son king of that country. When Olaf died (1387), Margaret continued to rule Denmark and Norway. In 1389, near Falkoping, Sweden, she defeated and captured the Swedish king, Albert of Mecklenburg. Sweden and Norway were prey to disorder. However, Margaret succeeded in persuading the Danish, Norwegian, and Swedish diets to accept her grandnephew, Eric of Pomerania, as king. He was crowned (1397) at Kalmar, and at the same time a tentative act of union of the three realms was drawn up (see Kalmar Union). Stockholm had held out against Margaret, but surrendered in 1398. In spite of Eric's nominal kingship, Margaret remained the actual ruler of all three kingdoms until her death. She ruled autocratically and energetically, leaving many offices unfilled and reducing others to complete dependence on her authority. Norway and Sweden resented her appointment of Danes to office. The empire built by her was one of the largest of Europe, but it was not lasting.

Without any surviving children, Margaret turned to finding an heir, and selected a grandson of her late sister Ingeborg, Erik of Pomerania, born about 1381. (She had his name changed to the more Scandinavian name "Erik" from his birth name of Bogislav.) He was named king of Norway, ruling with Margaret, in 1389. In 1396, Sweden and Denmark did the same. http://womenshistory.about.com/od/medrenqueens/a/Margaret-Of-Denmark.htm

Is Margrethe I your ancestor? Please don't go away!

ask our community of genealogists a question.
Sponsored Search by Ancestry.com
DNA
No known carriers of Margrethe I's DNA have taken a DNA test. 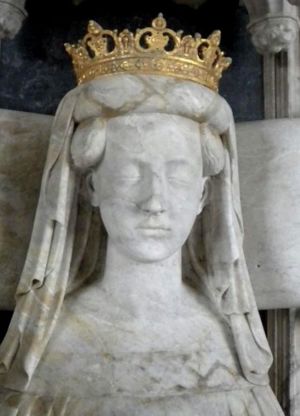 Leave a message for others who see this profile.
There are no comments yet.
Login to post a comment.
[Living Sälgö]
Wikidata Q202266 => This WikiTree profile is referenced from WikiData: Q202266 Wikidata Information Reasonator enwiki Ancestors (about wikidata)

Margrethe I is 24 degrees from Donald Howard, 20 degrees from Julia Howe and 9 degrees from Henry VIII of England on our single family tree. Login to find your connection.