Catherine was born at the Hôtel Saint-Pol in Paris on 27 October 1401. Early on, there had been a discussion of marrying her to the son of Henry IV, but the king died before negotiations could begin. The new king, Henry V, also proposed the match but demanded a large dowry and acknowledgment of his right to the throne of France.

Henry V went to war with France, and even after the great English victory at Agincourt, plans for the marriage continued. Catherine was said to be very attractive and when Henry finally met her at Meulan, he became enamoured. In May 1420, a peace treaty was made between England and France, and Charles acknowledged Henry of England as his heir. Catherine and Henry were married at the Parish Church of St John or at Troyes Cathedral on 2 June 1420. Catherine went to England with her new husband and was crowned queen in Westminster Abbey on 23 February 1421. In June 1421, Henry returned to France to continue his military campaigns.

By this time, Catherine was several months pregnant and gave birth to Prince Henry on 6 December 1421 at Windsor. The boy and his father would never see each other. During the siege of Meaux, Henry V contracted a fatal illness (dysentery) and died on 31 August 1422, just before his 35th birthday. Catherine was not quite 21 and was left a queen dowager. Charles VI died a couple of months after Henry V, making the young Henry VI king of England and English-occupied northern France. Catherine doted on her son during his early childhood.

Catherine was still young and marriageable, a source of concern to her brother-in-law Humphrey, Duke of Gloucester and Lord Protector. Rumours abounded that Catherine planned to marry Edmund Beaufort, Count of Mortain, her late husband's cousin. Humphrey was strongly against the match, however, and in the Parliament of 1427–8, a bill was introduced setting the rules for the remarriage of a queen dowager. The bill stated that if the queen dowager remarried without the king's consent, the husband would lose his lands and possessions, although any children of the marriage would still be members of the royal family and would not suffer punishment. Another rule stipulated that the king's permission could only be granted once he had reached his majority. At the time the bill was written, the king was only six years old.

Catherine lived in the king's household, presumably so she could care for her young son, but the arrangement also enabled the councillors to watch over the queen dowager herself. Despite all of this, Catherine entered into an amorous relationship with Welshman Owen ap Maredudd ap Tudor. Owen was probably born in about 1400, and may have gone to war in the service of Henry V's steward Sir Walter Hungerford in 1421 in France. Tudor was most likely appointed keeper of Catherine's household or wardrobe. The relationship began when Catherine lived at Windsor Castle, and she became pregnant with their first child there. At some point, she stopped living in the King's household and in May 1432 Parliament granted Owen the rights of an Englishman. This was important because of Henry IV's laws limiting the rights of Welshmen.

It is unclear whether Catherine and Owen Tudor actually married. No documentation of such a marriage exists. Moreover, even if they had been married, the question exists if the marriage would have been lawful, given the Act of 1428. From the relationship of Owen Tudor and Queen Catherine descended Henry VII of England and the Tudor Dynasty. Tudor historians asserted that Owen and Catherine had been married, for their lawful marriage was a vital link in the argument for the legitimacy of the Tudor dynasty.

Owen and Catherine had at least six children, Edmund, Jasper and Owen were all born away from court. They had one daughter, Margaret who became a nun and died young.

Catherine died 3 January 1437, shortly after childbirth at Bermondsey Abbey in London, and was buried on 9 February in the Lady Chapel in Westminster Abbey, the first royal burial in the chapel.

Owen Tudor was arrested on unspecified charges shortly after her death, but later released. He lived until 1461, when he was executed by Yorkists following the Battle of Mortimer's Cross in Herefordshire. Their sons were given earldoms by Catherine's son King Henry VI. Edmund married Margaret Beaufort, a lady of royal descent; their son became King Henry VII.

The wooden funeral effigy which was carried at her funeral still survives at Westminster Abbey and is on display in the Undercroft Museum. Her tomb originally boasted an alabaster memorial. In 1502 Henry VII had the Westminster Lady Chapel demolished and began the construction of his own mausoleum on the same site. Around the same time Catherine's coffin was unearthed and placed beside the tomb of Henry V in his own chantry. At this time, her coffin lid was accidentally raised, revealing her corpse, which for generations became a tourist attraction. In 1669 the diarist Samuel Pepys kissed the long-deceased queen on his birthday:

The coffin remained there until 1778, when it was placed in the Percy vault in the chapel of St. Nicholas. Catherine was Henry VII's grandmother and his only blood link to the English crown as the wife of a king and mother of another. Henry may well have intended to commission her tomb in his new chapel. Henry's will of 1509 mentions Catherine's burial at Westminster as one reason why he wished to be buried there himself.

In 1877 Catherine's coffin was removed from the Percy vault and the contents examined. The remains were thought to be those of a female approximately 5ft 7in tall with unusually long arms. The following year the coffin was replaced and the remains installed in a Purbeck marble tomb erected at the east end of Henry V's chantry incorporating the chapel altar-table, which had been set into the chapel pavement.

After the Queen's death, Owen and Catherine's enemies decided to proceed against Owen for violating the law of the remarriage of the queen dowager. Owen appeared before the Council, acquitting himself of all charges and was released. On his way back to Wales, he was arrested and his possessions seized. He tried to escape from Newgate jail in early 1438 and eventually ended up at Windsor Castle in July of that year.

Meanwhile, Owen and Catherine's two older sons, Edmund and Jasper, went to live with Katherine de la Pole, Abbess of Barking and sister of the Duke of Suffolk. Sometime after 1442, the king (their half-brother) took a role in their upbringing. Owen, their father, was eventually released on £2000 bail, but was pardoned in November 1439 (and the bail cancelled in 1440). Owen was treated well afterwards and was a member of the king's household until the mid-1450s. 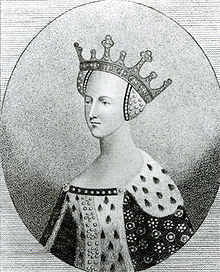 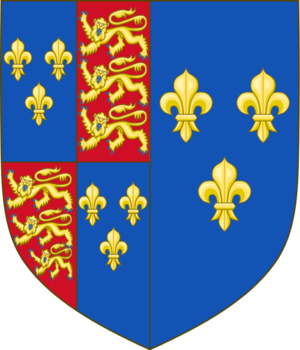 Descendants of Queen Catherine of Valois and Owen Tudor 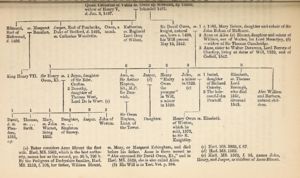 Catherine is 17 degrees from Cecil B. DeMille, 24 degrees from Rosalie Neve and 3 degrees from Henry VIII of England on our single family tree. Login to find your connection.