Charles VI was only 11 when he inherited the throne in the midst of the Hundred Years' War. The government was entrusted to his four uncles: Philip the Bold, Duke of Burgundy; John, Duke of Berry; Louis I, Duke of Anjou; and Louis II, Duke of Bourbon. Although the royal age of majority was fixed at 14, the dukes maintained their grip on Charles until he took power at the age of 21.

During the rule of his uncles, the financial resources of the kingdom, painstakingly built up by his father Charles V, were squandered for the personal profit of the dukes, whose interests were frequently divergent or even opposing. As royal funds drained, new taxes had to be raised, which caused several revolts.

In 1388, Charles VI dismissed his uncles and brought back to power his father's former advisers, who were known as the Marmousets. Political and economic conditions in the kingdom improved significantly as a result, and Charles earned the epithet of "the Beloved". But in August 1392, in the forest of Le Mans, Charles slew four knights and almost killed his brother, Louis of Orléans, in a sudden fit of madness.

From then on, Charles' bouts of insanity became more frequent and of longer duration. During these attacks, he had delusions, believing he was made of glass or denying he had a wife and children. He could also attack servants or ran until exhaustion, wailing that he was threatened by his enemies. Between crises, there were intervals of months during which Charles was relatively sane. However, unable to concentrate or make decisions, political power was taken away from him by the princes of the blood, which would cause much chaos and conflict in France.

He was born in Paris, the son of King Charles V and Joan of Bourbon. In 1380, at the age of eleven, he was crowned King of France at Reims Cathedral. He married Isabeau of Bavaria in 1385. Until he took complete charge as king in 1388, France was ruled primarily by his uncle, Philip the Bold, Duke of Burgundy. During that time, the power of the royal administration was strengthened and the authority to tax was re-established. The latter policy represented a reversal of the deathbed decision of the king's father Charles V to repeal taxes in response to a tax revolt known as the Harelle. Increased tax revenues were needed to support the self-serving policies of the king's uncles, whose interests were frequently in conflict with those of the crown and with each other. The Battle of Roosebeke (1382), for example, brilliantly won by the royal troops, was prosecuted solely for the benefit of Philip of Burgundy. The treasury surplus carefully accumulated by Charles V was quickly squandered.

The dismissal of the king's uncles from the royal administration in 1388 and the restoration to power of the highly-competent advisors of Charles V (known as the Marmousets) ushered in a new period of high esteem for the crown that resulted in Charles VI being widely referred to as Charles the Beloved by his subjects.

Charles VI's reign was marked by the continuing conflict with the English known as the Hundred Years' War. An early attempt at peace occurred in 1396 when Charles' daughter, the almost seven-year-old Isabella of Valois, married the 29-year-old Richard II of England. By 1415, however, the feud between the French royal family and the house of Burgundy led to chaos and anarchy throughout France that Henry V of England was eager to take advantage of. Henry led an invasion that culminated in the defeat of the French army at the Battle of Agincourt in October.

With the English taking over the country, John the Fearless sought to end the feud with the royal family by negotiating with the Charles, Dauphin of France, the king's heir. They met at the bridge at Montereau on 10 September 1419, but during the meeting, John was killed by Tanneguy du Châtel, a follower of the Dauphin. John's successor, Philip the Good, Duke of Burgundy, threw in his lot with the English.

In 1420, King Charles signed the Treaty of Troyes, which recognized Henry of England as his successor, disinherited his son, the Dauphin Charles, claiming he was illegitimate, and betrothed his daughter Catherine of Valois to Henry (see English Kings of France). Many historians have misinterpreted this treaty and the disinheriting of the Dauphin Charles. The Dauphin sealed his fate, in the eyes of the king, by committing treason: he declared himself regent, usurped royal authority, and refused to obey the king's order to return to Paris.[10] It is important to remember that when the Treaty of Troyes was finalized in May 1420, the Dauphin Charles was only 17 years' old. He was then a weak figure who was easily manipulated by his advisors.

Charles VI died in 1422 in Paris and is interred with his wife Isabeau of Bavaria in Saint Denis Basilica. Both their grandson, the one-year-old Henry VI of England, and their son, Charles VII, were proclaimed King of France, but it was the latter who became the actual ruler with the support of Joan of Arc.

Charles VI appears to have passed on his mental illness to his grandson Henry VI of England, whose inability to govern led England to a civil strife of its own known as the Wars of the Roses.

Sponsored Search by Ancestry.com
DNA Connections
It may be possible to confirm family relationships with Charles VI by comparing test results with other carriers of his Y-chromosome or his mother's mitochondrial DNA. Y-chromosome DNA test-takers in his direct paternal line on WikiTree: 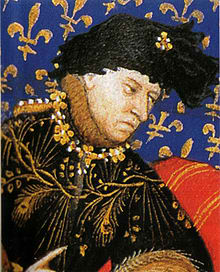 Tanya Lowry
it may have been meant to be this Charles: (doesn't explain the wife part though)

Tanya Lowry
I adopted this...BECAUSE it is messed up. The man is correct but the dates closely resemble his daughter Catherine. i can not do anything with it it needs a pre-1500 badge which I don't have. Goes to show Ancestry is not an accurate source of info.