Interview with Marion Pritchard telling about her life[1].

Marion (van Binsbergen) Pritchard was a Dutch woman who rescued many Jewish children during the Holocaust. After World War II she moved to the United States with her husband. She later lectured frequently about her experiences during the war.

Emily Langer wrote, "She credited her father, a Dutch judge who abhorred the Nazi ideology, and her mother, an Englishwoman who raised her daughter in the Anglican faith, with instilling in her a sense of justice and moral resolve."[2]

Marion van Binsbergen married Captain Anton Arnold Pritchard on 18 April 1947 in Windsheim, Bayern, Germany, he was working and director of the U.N.R.R.A Area Team Windsheim, Marion was welfare officer of the same Team [5]

Short after the marriage they emigrated to the USA departing from Berlin on 29 May, 1947 and arriving in New York on 30 May 1947, their final destination was Rhode Island, North Providence 36, Wellesly Ave [6]

Death: Het Parool 21 December 2016, 21:26:
Amsterdamse verzetsvrouw Marion Pritchard overleden
Marion Pritchard, born in 1920 in Amsterdam as Marion van Binsbergen daughter of a judge, today passed away in her hometown Washington at the age of 96 years. Pritchard for certain saved 150 jews in WWII. [7][2]

Is Marion your relative? Please don't go away!

ask our community of genealogists a question.
Sponsored Search by Ancestry.com
DNA
No known carriers of Marion's ancestors' DNA have taken a DNA test. 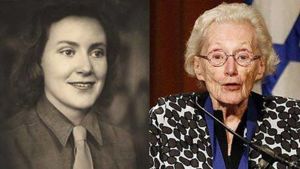