Hilletie Cornelise Van Slyck was part Mohawk through her mother, and was brought up among the Mohawks and later received "the rudiments of a Christian education" in Albany and Schenectady, New York.[1]

She married Pieter Danielse Van Olinda in 1663 or not long thereafter.[2]

The first minister of the First Reformed Protestant Dutch Church at Schenectady was Domine Petrus Thesschenmaeker, who served from 1684 until February 8, 1690. It was on that day the French and Indians burned down the town, and the church with it, slew sixty inhabitants, including the the Domine and took twenty-eight captives for a long winter march to Canada. [3]

Hillitie Van Slyck was appointed as an interpreter to assist the second minister, Domine Barnhardus Freerman and Domine Johannes Lydius, who came with him. During his tenure, Domine Freerman, not only converted many of the Indians, he translated "the whole of the Gospel of St. Matthew, the three fist chapters of Genesis, several chapters of Exodus, a few of the Psalms, many portions of the Scriptures relating to the birth passion, resurrection and ascension of our Lord, and several chapters of the first Epistle of the Corinthians, particularly the fifteenth chapter, proving the resurrection of the dead. But his work was not printed." Probably this was the first attempt made to translate the church service or portions of the Holy Scriptures into the language of the Mohawks. [4]

The footnote on page 74 of the "History Of The Church" (see image) states that Hillitie married Pieter Danielse Van Olinda.

Sponsored Search by Ancestry.com
DNA
No known carriers of Hilletie's DNA have taken a DNA test.

Images: 1
Interpreter of the Gospel 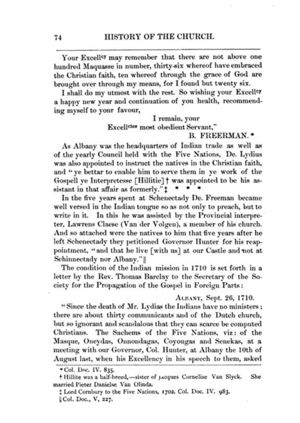 Leave a message for others who see this profile.
There are no comments yet.
Login to post a comment.
N Fanning
Wikitree profiles of the 2 men with whom Hilletje worked as interpreter (see previous comment):
posted Dec 01, 2019 by N Fanning
N Fanning
This brief biography mentions that "for several years Hilletje was employed with Jan [sic] Baptiste Van Epps and Lourens Claese Van Der Volgen as provincial interpreter to the Indians", and that Mohawk sachems gave her 2 separate gifts of land, including "the great island in the Mohawk River at Niskayuna in 1667" :

Ellen Smith
Van Slyck-45 and Van Slyck-29 appear to represent the same person because: Same person. Ready to merge to the NNS project's PPP profile for her.
posted Aug 17, 2015 by Ellen Smith