Robert died of Pneumonia on May 21, 1917 at Naval Base Mare Island, Solano, Californa.[2] He was buried at IOOF Mountain View Cemetery, Goldendale. He has two memorials there. One has his birth and death dates and a photo of a plaque recognizing the soldiers and sailors of Klickitat County, Washington.[3] The second has a photo of a stone with the label, U.S.N.[4] The photo included with this profile is his memorial plaque at Maryhill_Stonehenge.

Thanks to Philip Smith for starting this profile. Click the Changes tab for the details of contributions by Philip and others.

More records on Robert Venable may be available offline. Schedule a free consultation with our friends at Trace. 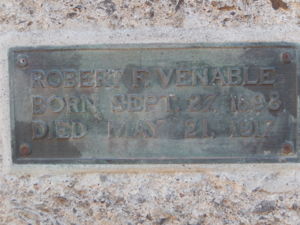