Heribert was a Carolingian aristocrat who played a significant role in Francia.[1]

Charles Cawley (Medlands) estimates the birth in the time period 848-840. [4] Other writers often use an estimated birth year of 850.[5] Stewart Baldwin (Henry Project) reminds us that Heribert's actual date and place of birth are unknown.[3]

He was a younger son of Pepin of Vermandois. Cawley notes that if Regino's account gave the proper order for Pepin's the three children, Heribert would have been the youngest of them: "Bernardum, Pippinum et Heribertum" [6]

Baldwin states that Heribert's mother is unknown. [3] "The idea that she was a member of the "Nibelungen" family (descendants of Childebrand, son of Charles Martel) is a conjecture based on the fact that Heribert I's predecessors in some of his possessions belonged to that family, and on the presence of the name Heribert in that family [see Werner (1960), 101-6]." [3]

A contemporary of Baldwin II, Count of Flanders he had the advantage of being a Carolingian, a great-grandson of Pepin of Italy, a son of Charlemagne. [7]

There having been no issues regarding the legitimacy of his children, we know that Heribert was married. However, Baldwin, the source most unwilling to surmise, states that Heribert's wife or wives are unknown. [3]

Cawley notes that he married Lietgardis who died 27 May, year uncertain. [8]

Baldwin states very strongly, however, that Berthe, daughter of Guerri (Wedricus), count of Morvois, and his wife Eva is a falsely-attributed wife of Heribert, whose relationship is only fictional.[3] Baldwin notes that the source of this fiction is the Historia Walciodorensis Monasterii, which includes a fabricated genealogy. The result of the fabrication is that the Historia's subject, Ybert, is falsely made a relative of Count Heribert, and Ybert's mother Berthe becomes Heribert's wife. [3]

In recognition of this fiction, Bertha has been delinked as a wife of Heribert, and his children are not shown as her children.

Heribert "first appears in records in 877, when he and his brother Pépin were among those sent by emperor Charles the Bald to prepare for a meeting between the pope and emperor." [3]

Herbert became count of Soissons before 889 and was probably charged with defending the Oise against Viking intrusions. [1]

Heribert succeeded Pepin, his predecessor, as Count of Vermandois, in 889. [1]

893 Heribert With Brother Pépin and Charles the Simple

896 Meaux and murder of brother Raoul

He succeeded Theodebert as Count of Meaux in 896.[1]

Baldwin reports that in 896, "Heribert killed Raoul, brother of count Baldwin II..., who had been expelled earlier that year from the countship of Vermandois, and it is probably in this year that Heribert became count of Vermandois and lay-abbot of Saint-Quentin." [3] As reported in Latin, Heribert killed "Rodulfum comitem filium Balduini comitis". [6]

"Heribert last appears in 900 (the year that Annales Vedastini end). Baldwin adds that "Regino of Prüm, writing ca. 906, in comments added to the obituary of king Bernard of Italy under the year 818, mentions that Bernard's grandson Heribert had killed count Rodulf, son of Baldwin, in Regino's own time, and that Heribert was killed not long after by a supporter (also named Baldwin) of Rodulf's brother Baldwin [II] of Flanders." [3]

Thus Heribert's death would have occurred between 900 and 906, place unknown. [3]

There is some uncertainty regarding Heribert's children. Cawley states he had two proven children and two speculative. [8] Baldwin considers all the children unproved, two of whom are highly probable (Heribert and an unnamed daughter), one conjectured (Adela), and one falsely attributed (Beatrix). [3]

There are several strong reasons why Baldwin regards Beatrix, as a daughter of Heribert, to be false, and her existence legendary. These are discussed on the page for Beatrix de Vermandois.

As a legendary person who never existed, Beatrix is not linked to any parents, spouse or children, but her profile is cross-referenced here.

Line of Descent from Charlemagne to William the Conqueror

Sponsored Search by Ancestry.com
DNA
No known carriers of Héribert's DNA have taken a DNA test. 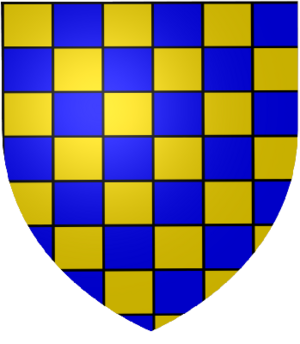 Jack Day
Based on Stewart Baldwin's Henry Project, I"m de-linking Beatrix as a daughter. Since she has widespread presence among various genealogies and on the internet, her profile will continue as "legend" documenting as much as possible how she came to be believed as the daughter of Heribert and wife of Robert.
posted May 23, 2017 by Jack Day

Jack Day
Bertha has been delinked as wife and as mother of Heribert's children.
posted May 19, 2017 by Jack Day

Jack Day
Based on Stewart Baldwin's Henry Project, I propose to de-link Bertha as wife of Heribert. A link will be retained in the narrative.
posted May 07, 2017 by Jack Day

Jack Day
I'm adding research of Richardson, Cawley and Baldwin (Henry Project) to this profile. As a result of their research, de-linking one of the spouses and one or more of the children may be appropriate. FYI!
posted May 06, 2017 by Jack Day

John Atkinson
Could this profile be set to Open privacy level. He is definitely older than 200 years, and probably needs to be merged.
posted Jun 26, 2015 by John Atkinson

Bob Fields
Vermandois-3 and Vermandois-83 appear to represent the same person because: Nearly the same birth/death dates, and the same spouses. Thanks.
posted Mar 15, 2014 by Bob Fields