Disputed origins: Disconnected from parents Hugh Vernon and Elizabeth Eccleston. No evidence has been found to support these parents.

[The "Vernon Family" story begins around 888-906 AD, when the Vikings under "Marching Rollo" invaded and conquered Normandy, including the ancient town of Vernon. The town dates back to Gallo-Roman times and is located in a beautiful valley on both sides of the Seine River, about 30 miles northwest of Paris. Rollo's son, William Longsword, became Duke of Normandy in 925. The family became very powerful and wealthy, holding many large estates in Normandy. Richard de Reviers, the first Vernon, was a good and loyal officer serving the Duke of Normandy, William the Bastard (future William the Conqueror). He was such a good and loyal officer, that in 1050 he was given the little town of Vernon-sur-Seine as a reward. From then on, Richard de Reviers and all his descendants took the name of their town for their name. The VERNON family was born. Richard de Reviers changed his name to Richard de Vernon. Sixteen years later, when William the Conqueror invaded England in 1066, at least two of his high-ranking officers were Vernons. Richard de Vernon as well as many others of the family also participated. For this service, great estates in Normandy and England were granted to the Vernon family, and its members were ranked among the wealthiest and most powerful in both countries. Several members became barons and were knighted. "The Three Quaker Brothers" The Quaker Vernons descended from Sir Richard De Vernon, Baron De Shipbrook. They were not only friends of the Quaker William Penn but related to him through marriage. William Penn's father was owed a great deal of money by the King of England, and to settle that debt the area of Pennsylvania was given to William Penn. Thomas Vernon made the surveying voyage to Pennsylvania with William Penn in 1681 and returned later that year to England. He and his brothers Randall and Robert were among the first to obtain property in the newly acquired land. Land Titles in Delaware County Records reveal that the Three Vernon Brothers purchased 625 acres each in March 1681. Robert Vernon purchased an additional 330 acres in 1684. Randall Vernon purchased an additional 829 acres in 1711 and 1712. The three Quaker Brothers; Thomas, Randal, and Robert came to America, arriving on a Liverpool ship, "Friendship". Robert Crossman was the Master, and the ship is presumed to have arrived on 14 August 1682 at Upland, Pennsylvania. The "Friendship" of Liverpool was one of the 24 known ships that sailed from England, arriving December 1681 through December 1682 with passengers to establish William Penn's "Holy Experiment" in Pennsylvania. These 24 ships made up "William Penn's Fleet", and descendants of the passengers are eligible to become members of the "Welcome Society". Their Father was James Vernon and their Mother was Hester of Cheshire, England who probably lived in the neighborhood of Davenham, between Northwich and Middlewick. She died on April 1, 1675. Thomas Vernon of "Stanithorne", near Middlewick, County Palatine, Chester England had been persecuted for being a Quaker in 1678/9. He brought with him to America his wife, Elizabeth, and a son Thomas, aged about 12 years. He settled near Upper Providence, PA., and died Dec. 25, 1698, buried at Chester, PA. His widow died on May 24, 1714. Their son, Thomas, married Lydia Rolf/Ralfe on August 13, 1702. He was born about 1670 and died Nov. 4, 1754, or Apr. 11, 1754. Randall Vernon of Sandivway, in the Parish of Weaverham, County Cheshire, England, believed to be the second son, was born in England about 1640. He married (being then the son of Maron) on Sept. 14, 1670, at the home of Thomas Vernon in the parish of Middlewick, Sarah Bradshaw of Stanithorne. Sarah Bradshaw was probably related to John Bradshaw, who was appointed Premier of England after Charles I was beheaded. She died on Dec. 18, 1718/9. They settled in Lower Providence Tsp., PA. Randall served as a member of the PA. assembly in 1687 and was a Justice of the Peace in 1692. He died in 1734. Robert Vernon of Stoke in the Parish of Aston, County Cheshire, England, the third son, came with his wife, Elinor Minshall, daughter of John Minshall, and their sons John and Jacob. Robert was born around 1642 and died in Jan or Feb. 1709/10. His wife Elinor died on July 24, 1720. The Brothers lived in the same home after settling in Nether Providence, Chester (now Delaware) County, PA. They built large homes in later years. Thomas Vernon's home was destroyed. The houses of Randall and Robert built abt. 1690 are still in good condition in Rose Valley near Media, PA.] James Vernon was the first man in the area of Chester, England to become a Quaker. Throughout the records of Cheshire County, there is evidence of persecution of the Quakers. James' son, Thomas, was particularly tormented during the late 1600s. His stock was driven off of his estate and another property was taken from him at will. Cheshire suffered indiscriminately from the destruction of property.

Thank you to Bob Nichol for creating WikiTree profile Vernon-350 through the import of Willis.ged on Mar 8, 2013.

Thank you to Samuel Watson for creating WikiTree profile Vernon-493 through the import of WATSON_2013-12-06.ged on Dec 25, 2013. Click on the Changes page for the details of edits by Samuel and others. 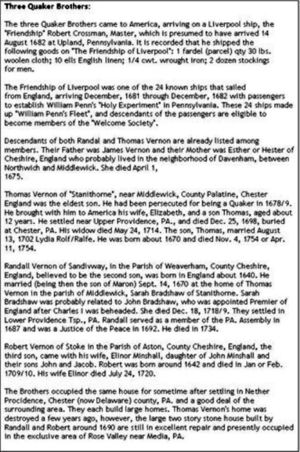 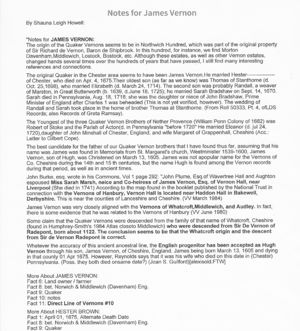 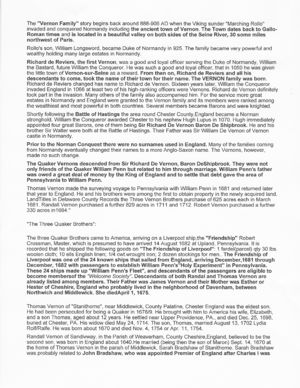 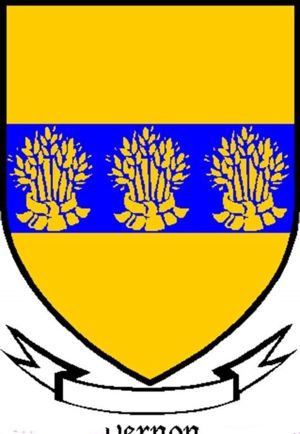 Leave a message for others who see this profile.
There are no comments yet.
Login to post a comment.
Tony Vernon
I believe Charlou has an excellent point on our Quaker Vernon brothers. I have found a deed that proves that these three are brothers, but nothing that is evidence James is the father. I have seen this assertion in the Vernon Vignettes and Greta Vernon Davis Ramsay's book, but no evidence. Further, when I search to try to find a common ancestor, the most likely candidate is one Randle Vernon of Tarpoley. This is based on comparing the father names that are shared between the three brother's first names on Familysearch. There is no James that fits the bill. To Charlou's point, records survive of multiple Roberts, Thomas's and Randles from that period in Cheshire, so we need to be careful with assumptions.

If anyone else has evidence otherwise, please let me know. Cheers, Tony

Charlou (Baker) Dolan
Unfortunately, nothing posted here is actually documentation supporting the generations before the Vernon brothers came to America. There were many, many Vernons in Cheshire, and they used the same names over and over again. I have looked at many records in Cheshire and have not found any record that shows the three Vernon brothers who came to America. Quite possibly there exists such a record, but if it exists, it is not included in all the pages of the Vernon Family books listed here as sources. I know, because I have looked at those books. A flat statement published in a book that "these are his parents and grandparents" when there is not a single document to support that claim is NOT acceptable. Any claim or family tree or gedcom without documentation must be rejected.
posted Jun 01, 2019 by Charlou (Baker) Dolan
Pamela Tandy
Thank you, cousin Sam and Bob Nichol, for this fascinating history. I hope you don't mind my attaching my ancestor, Robert Vernon to your father of Robert, James. -- Pamela (Tandy-271)
posted Jul 20, 2017 by Pamela Tandy