Eustace (Vesci) de Vescy was a member of aristocracy in England.

Eustace inherited the barony of Alnwick, Northumberland, coming into possession when he was of age in 1190 in return for a fine of 1300 marks. With the barony came lands in Northumberland and Yorkshire,[1][4]

In 1194 Eustace attended the second coronation of Richard I.[1][2] In December that year he is recorded as being with Richard I at Chinon, France.[1][2] In 1199 he was one of the guarantors of a treaty between King John of England and the Count of Boulogne.[1][2]

The following year he served in King John's expedition to Ireland; but two years later, in 1212, he was accused of plotting against John, fled to Scotland, was outlawed, and had his lands seized by the Crown.[1][2] His lands were given back after John submitted to the Pope and undertook to return property confiscated during the papal interdict of England.[1][2]

In 1213 he refused to join in John's expedition to Poitou, and the next year withheld scutage in 1214 for the campaign there.[1][2]

Despite a papal admonition to stay loyal to John, Eustace aligned himself with the Barons who compelled John to sign the Magna Carta in 1215, of which he was one of the Sureties.[1][2] He was among the rebel Barons excommunicated later that year.[1][2]

In 1193 Eustace married Margaret, illegitimate daughter of William the Lion, at Roxburgh, Scotland.[3] She brought him lands in Roxburghshire.[2] They had three sons:

In early May 1216 Eustace attempted reconciliation with John[1], but, after Louis of France invaded England, he set out with his half-brother Alexander II of Scotland to pay Louis homage.[1] On the way, he was killed during a siege of Barnard Castle, County Durham.[1][2][3]

"Eustace de Vesci (1169/70-1216) was one of the group referred to by contemporaries as ‘the Northerners’, the original hard-line leaders of the baronial resistance to King John. The son of William de Vesci and Burga, daughter of Robert de Stuteville, lord of Cottingham (Yorks.), he was lord of Alnwick in Northumberland and an extensive landowner in northern England. He was married to Margaret, illegitimate daughter of William the Lion, king of Scotland and half-sister of Alexander II of Scotland. At Richard the Lionheart’s second coronation in 1194, following his release from captivity in Germany, he witnessed a royal charter in favour of his father-in-law.

"At the end of 1194 Eustace is found engaged in Richard’s service at Chinon, the great Angevin castle in Anjou, and five years later was one of the guarantors of the treaty between King John, newly succeeded to the throne, and Count Renaud of Boulogne. In 1210 he accompanied John on his expedition to attempt the pacification of Ireland. Accused in 1212, alongside another important northern lord Robert FitzWalter, of plotting against John’s life, he fled to Scotland, and his lands were seized. After John’s submission to the pope in 1213, however, he was allowed back, and a few months later he was awarded restitution of his lands, although his castles at Alnwick and Malton were destroyed. Later in 1213 in a gesture indicative of his continued defiance of the king, he refused to enlist in John’s expedition to Poitou, in south-west France, and in the following year he also refused to pay scutage (money in lieu of military service). His intense dislike of John was evidently well known to the pope who, in 1214, warned him to remain loyal to the king, since his submission to the pope regarded as a faithful son of the Church. In 1215 he was deeply involved in the military operations that led up to the making of Magna Carta, associating himself closely with a Yorkshire rebel, his kinsman Robert de Ros of Helmsley. In September he was one of a group of nine malcontent barons singled out for excommunication by the pope. Although by the following May he was seeking a reconciliation with the king, as soon as Louis, the French king’s son, took on the leadership of the baronial cause he went over to him. He met his death in late August 1216 at Barnard Castle in County Durham, where he was shot in the head by an arrow while conducting siege operations. He left a young son William, who came of age in 1226."

As a surety baron, Eustace de Vescy is managed by the Magna Carta Project, even though he is one of the eight barons with no traced ongoing line of descendants. ~ Noland-165 00:47, 27 January 2018 (EST)

This profile was revised for the Magna Carta Project by Michael Cayley in January 2020.

Sponsored Search by Ancestry.com
DNA
No known carriers of Eustace's DNA have taken a DNA test. 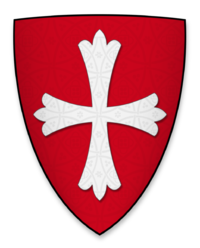 Michael Cayley
I have now done the main work I intend on this profile. If anyone spots any typos or slips, please either correct them or send me a message. Thanks!
posted Jan 07, 2020 by Michael Cayley

Eustace is 25 degrees from Laurie Giffin, 38 degrees from Toni Morrison and 12 degrees from Henry VIII of England on our single family tree. Login to find your connection.