David Phillip Vetter was born in Houston, Texas on 21 September 1971. He was the second son and youngest child of his family. He was a prominent sufferer of severe combined immunodeficiency (SCID) which he inherited from his unaffected parents; his older brother, also named David, died as a result from complications of the same disorder. SCID resulted in the younger David's weaker immune system. As a result, upon birth David was placed in a microbiologically sterile environment; hence, he was known as "bubble boy" in the media in reference to the isolation chamber used to manage his SCID. Upon entering the chamber, he was baptized into the Roman Catholic Church with sterilized holy water.

Throughout the first years of his short life, David lived at Texas Children's Hospital in Houston, but later on, he lived with his family in Dobbin, Texas. He died from Burkitt's lymphoma resulting from his condition while in Dobbin on February 22, 1984, at the age of 12, and was buried at Conroe Memorial Park in Conroe, Texas three days later on February 25. His surname was not revealed until around 1995 in respect of the privacy of David's family.

Is David your relative? Please don't go away! 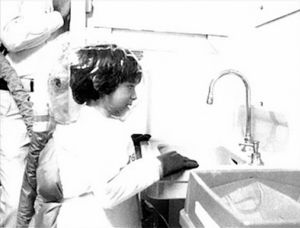