Simon Vinson was born on the 13th November 1826, in Torquay, Devonshire, England, the son of Thomas Vinson and Catherine Manley. Simon was christened with the forenames of Simon John Love, on the 7th December 1826, in Tor-Moham, Devonshire, England. The last name appears to be written as "Vincens" and transcribed as "Vincent". His father's rank or profession is listed as "mason", and R. Gee officiated.[1][2]

Simon married Mary Ann Doloway on the 17th December 1855, in the Salem Chapel, Merthyr Tydfil, Glamorgan, Wales, by the Rites and Ceremonies of the Independents, officiated by Joshua Burns, Minister, with witnesses Philip Harrison (who signed his name) and David Tibbot (who made his mark). Simon's Rank or Profession is listed as "Excavator". He signed his name, while Mary Ann made her mark. His father is listed as Tom Vinson, stone mason. Her father is not listed. [3]

On the 7th April 1861 the Vinson family (listed as Vensen), made up of Simon, wife Ann, and sons Thomas, William, and John, were living in Cardiff Road, Aberdare, Glamorganshire, Wales. Simon's birthplace is listed as "Tarkey" in Devonshire (a bad rendering of Torquay), England, and his estimated year of birth is 1829 (off by three years).[4]

Simon Vinson passed away on the 6th August 1867, of general paralysis, in the Lunatic Asylum Newcastle Higher, Bridgend, Glamorgan, Wales, three months seven days before his 41st birthday. His name is rendered as "Simon Vincent" and his age given as 38 years.[5][6] 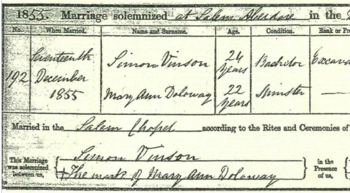 Portion of Simon's marriage certificate, showing both his and Mary Ann's names, their ages, and the date. (Used with permission.)

ask our community of genealogists a question.
Sponsored Search by Ancestry.com
DNA
No known carriers of Simon's DNA have taken a DNA test.

Simon is 30 degrees from Danielle Liard, 26 degrees from Jack London and 24 degrees from Henry VIII of England on our single family tree. Login to find your connection.