Andrew's birth name was Andreas Vogler, but he used the name Andrew Fogle after immigrating to America. Some records also show the surname as Vogel. His place of birth is now part of Südwestpfalz District in the state of Rhineland-Palatinate, Germany.

Immigrated through the port of Philadelphia on 09 Oct 1749 on the ship Lydia.

"Present: Thos Lawrence, Esquire, Mayor. The Foreigners whose Names are underwritten, imported in the Ship Lydia, Captn John Randolph, from Rotterdam, but last from Cowes in England, did this day take the usual Qualifications to the Government. By the List 154. Persons . . . Wirtemberg, Dourlach, Zweybrecht, Palatinate.

"*This date is evidently wrong. It should be Oct. 9th. See next ship.

[Profile Manager's Note: Sources [2] and [3], along with profiles by other researchers, have extensive biographical information about Andrew and cite some original sources that are not readily available. Their records indicate that he was naturalized on 17 Apr 1761 in Maryland, along with his brother-in-law Peter Barth. At the time Andrew came to Philadelphia, arriving male immigrants over the age of 16 were required to take an oath of allegiance to King George the Second of Great Britain and the Province of Pennsylvania. Sources [4] and [5] confirm the immigration data and the information about the oath, indicating that Andrew was unable to write his name and signed his oath with a 'X'.

[Profile Manager's Note: This publication is out-of-print and listed as unavailable by the traditional repositories of genealogy data. It is mentioned here as a source in order to preserve a record of its existence in this data base.]

ask our community of genealogists a question.
Sponsored Search by Ancestry.com
DNA Connections
It may be possible to confirm family relationships with Andrew by comparing test results with other carriers of his Y-chromosome or his mother's mitochondrial DNA. However, there are no known yDNA or mtDNA test-takers in his direct paternal or maternal line. It is likely that these autosomal DNA test-takers will share some percentage (beta) of DNA with Andrew: 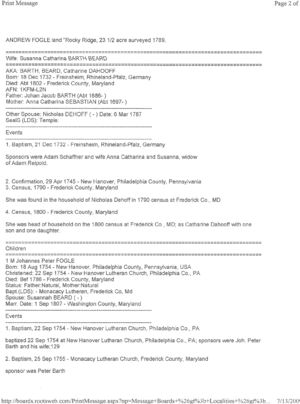 Leave a message for others who see this profile.
There are no comments yet.
Login to post a comment.
Dennis Barton
Yes, I'd certainly agree with your observation about the naturalization date. Several of the sources show the date as Apr 1761, so I have corrected the typo. Thanks for bringing it to my attention, David.
posted Sep 27, 2019 by Dennis Barton

David Thomson III
It is unlikely that Andreas was naturalized in 1861 if he died in 1786. I have a record that show an Andreas Vogel who arrived on the ship Christian VII 13 Sep 1749.