Leopold IV von Österreich Habsburg was a member of the aristocracy in Europe.

Leopold von Habsburg, born 1371, was the son of Leopold III, duke of Austria, and Viridis (Verde) Visconti. He was Duke of Styria and Duke of Austria[1].

He married Catherine of Burgundy, daughter of Philippe de Valois and his wife Margaret of Flanders, in Vienna on 15 August 1393 (by proxy in Dijon in May 1392). They had no children[1].

Note: Duke Leopold IV of Hapsburg, son of Leopold III, was heir to the Empire of Austria when his father died in 1386. Leopold was co-ruler with his brother, William. William died in 1406, leaving Leopold IV to rule alone until 1411. His successor was his brother, Ernest.

Is Leopold IV your ancestor? Please don't go away!

ask our community of genealogists a question.
Sponsored Search by Ancestry.com
DNA
No known carriers of Leopold IV's ancestors' DNA have taken a DNA test. 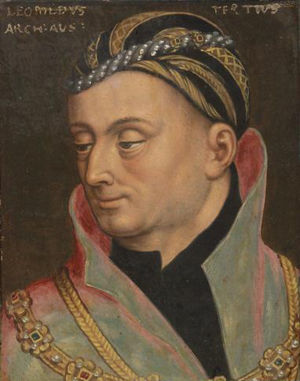