THE ASSAULT ON THE MASTER OF THE MOUNT ELIZA DEPOT. PROCEEDINGS AT THE POLICE COURT.

At the Perth Police Court, before Mr. Cowan, P.M., on Wednesday, Edward Collings was charged with assaulting Mr. J. P. Wade, master of the Mount Eliza depôt, With intent to do him some grievous bodily harm, by stabbing him with a knife, on the 31st August. Dr. Harston deposed that he examined Mr. Wade on the 31st August, and found a deep incised wound on the forehead ; a penetrating wound on the cheek, and an incised wound on the left nostril, cutting through into the nasal cavity. On the right wrist there was a deep wound which was bleeding profusely, and there were other minor cuts about the head. The wounds might have been dangerous, had they not been immediately attended to. Witness dressed them, and the patient had since recovered. The knife produced would be likely to cause the wounds described. Mr. Wade had lost a lot of blood, and was under witness' care for about a week. John Price Wade, master of the Mt. Eliza Depot, deposed that the prisoner was an inmate of the depot on the 31st August. About twelve o'clock on that day, witness was in the cook-house, serving out the dinner, when he heard someone rubbing a knife against the wall. He went to the door, and saw it was the prisoner. He then went to him and told him to rub the knife on a stone, and not on the wall. Prisoner replied " I'll rub it into you, you-," and struck witness on the face with the knife. Witness tried to seize his hand, and the prisoner pulled the knife through witness's hand, cutting his hand across the fingers. He then called Callaghan and the prisoner struck him again on the face with the knife, tripped him down, knelt on him, and then drew the knife across his forehead, cutting him deeply. His left nostril was cut through and his wrist was badly wounded. Callaghan pulled the prisoner away. Witness heard a carriage going by, and Mr. E. T. Hope stopped his carriage and drove witness to Dr. Harston, who dressed his wounds. Since then witness had been laid up until the 6th inst. The knife produced was similar to the one with which the prisoner inflicted the wounds. By the prisoner : I pointed to a stone for you to rub the knife on. I did not come out and tell you not to shove the wall down. By the Bench : On the previous day I had told him to wheel half a barrow load of bricks about 20 yards and he refused ; consequently his tobacco was stopped. That was the only complaint he had. James Callaghan, gate keeper at the Mt. Eliza depot, deposed that on the day in question he was in the cook house at mid-day. He and Mr. Wade were cutting up the dinner. He heard a knife being sharpened against the brick wall of the hospital. Mr. Wade went out and he heard him say there was a stone for that purpose. Shortly after, Mr. Wade shouted "Jim, Jim," and witness rushed out. He saw the prisoner pressing Mr. Wade against the wall, and the latter had hold of the prisoner's hands, holding them up. Prisoner had a dinner knife in his right hand and was doing his best to use it. Mr. Wade had blood on his face. Witness could not get the knife and he pulled them both from the wall, and knocked the prisoner down, Mr. Wade falling under him. Witness saw the prisoner draw the knife across Mr. Wade's face. The prisoner removed the knife to his left hand, and witness caught hold of it and Pearse, an inmate, took the knife from him. Robert Pearse, an inmate of the Mt. Eliza depot, deposed that on the day in question, about dinner time, he was near the cook house, and saw Mr. Wade, Callaghan, and the prisoner all fall down together. He ran up and took a knife which had blood upon it, from the prisoner's hand. The knife produced was the same as that used by the prisoner, and the blood was still on it. He handed it to Sergeant Claffey. Prisoner said he did not remember seeing either of the last two witnesses. Sergt. Claffey said on the 31st August, he went to the Mt. Elisa depôt. He arrested the prisoner on a charge of wounding Mr. Wade. Prisoner's clothes were smothered in blood. The knife that had been produced in evidence, was handed to him by Robert Pearse. The prisoner was committed for trial.

FUNERAL NOTICES. WADE.-The Friends of the late Mr. John Price Wade, late Master of the Old Men's Home and of 18 Henry-street. Sobiaco, are respectfully invited to follow his remains to the place of interment, the Anglican Cemetery, East Perth. The Funeral is appointed to leave his late residence, 18 Henry-street Subiaco, at 3 o'clock THIS (Thursday) AFTERNOON and the Masonic Temple, Hay-street, at 3.45 o'clock, arriving at the East Perth Cemetery at 4.15 o'clock. No flowers, by request. C.N.SMITH and CO., Undertakers 361 Newcastle-street, Perth. Tel 1231.

LODGE OF ST: JOHN; No.1, W.A.C. WADE.-Members of the above Lodge and the Craft in general are requested to attend the Funeral of our late brother, John Price Wade. P.M. The Brethren will assemble at the Masonic Temple, Hay-street, at 3.30 o'clock THIS (Thursday) AFTERNOON, and proceed to the Anglican Cemetery, East Perth. (No regalia.) White ties and gloves. A. T. EWINS, W.M. D. G. CTERCTEKO, Sec.

The funeral of the late Mr. John Price Wade took place on Thursday afternoon, and was largely attended. The deceased was born in London, and arrived in this State 27 years ago, and was shortly after appointed master of the Old Men's Home, a position he retained for nearly a quarter of a century, retiring about three years ago on a pension. He leaves a grown-up family of one son and two daughters. The cortege moved from his late residence,18 Henry-street, Subiaco, and proceeded by road to the Anglican Cemetery, East Perth, where the remains were interred in the family grave in the presence of a large circle of friends and members of the Masonic order, who had joined the procession at the Masonic Temple, Hay- street, Perth. The chief mourners were Messrs. Lewis (son-in-law), Jas. Gallop, A. Gallop, H. Gallop, and J. Faulkner. The pall-bearers were Bros. A. T. Ewins, WM., Major Thos. Sherwood, D.G.M., C. B. Wright, P.M., A. C. M'Callum, P.G.B.B., J. M. Lapsley D.G.M. (S.C.), and Mr. J. Longmore, Superintendent Charitable Institutions. Among the many members of the craft present were Bros. J. M. Lapsley, A.C. M'Callum and J. D. Sanders, representing the Westralia Preceptory of Knight Templar's, and Bro. J.D. Stevenson Grand Secretary W.A.C. There were no flowers (by request). Canon W. F. Marshall conducted the burial service, and the funeral arrangements were carried out by Messrs. C. H. Smith and Co.

The original Sunset Hospital, previously known as the Old Men’s Home, was built overlooking the Swan River at Freshwater Bay in 1904. It replaced the Mount Eliza Depot, which had been used for convicts, the poor and sick since the 1850s. On October 11th 1964, Matron Pegrum, together with her staff and seventeen female patients transferred from Knutsford Hospital to Ward 10 at Sunset Hospital. In 1994 it was announced that the hospital would close, stating unsuitability of the buildings and the cost of maintenance as the reason. A history of the Hospital is shelved in Battye under 362.16WHY, “Sunset Hospital”.

More records on John Wade may be available offline. Schedule a free consultation with our friends at Trace. 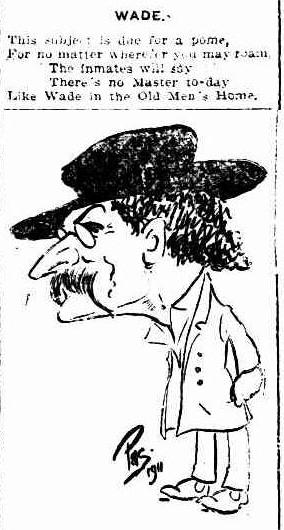 Leave a message for others who see this profile.
There are no comments yet.
Login to post a comment.
R Wade
Name: John Price Wade