Ages and birth dates, especially for the children, are estimates or approximations which are not always consistent with census records which are in themselves often inconsistent.

Joseph Waguespack and his wife, Anna Barbara Ackerman, are the progenitors of the Waguespack family in Louisiana.

Joseph Wagenspack, the son of Johannes Waguespack and his wife Margaretha Bachmann, was baptized in the Catholic Church in Artolsheim on 8 April 1699.[1] [2] Based on his origin as stated in the 1724 census, it is believed that he was born shortly before his baptism in the nearby village of Schwobsheim. At this time the area was under French rule, but was culturally and linguistically German.

The marriage record for Joseph's parents, Joannes Wagenspack and Margaritha Bachmann, has not been found, but baptismal records for three of their children born in Schwobsheim have been found.

The church record books for Schwobsheim were not kept separately until 1710. Prior to that date, the the Schwobsheim records are with the records for the parent parish of Artolsheim. Since Artolsheim began keeping registers in 1662 and did not contain the marriage record for Joseph Waguespach's parents, it is likely the parents moved to Schwobsheim from some other area.[2]

In 1720, Joseph left his home village, and traveled to Phalsbourg in the Moselle region of north eastern France. There before departing for Louisiana in the company of Commissioner Dourner, he married Anna Barbara Ackermann on July 23, 1720. The record of their marriage reads:

The twenty-third of July 1720, I, the undersigned parish priest of this place, have blessed, confirmed and ratified in the view of the church, the legitimate marriage contracted between (name of Sebastien KAUFFMANN lined thru.) Joseph VAGENSPACK, son of Jean WAGENSPACH and deceased Margeritte, his mother, native of Augenem near Fort Louis, Diocese of Strasbourg, the first party and Anne Barbe ACKERMANN(IN), daughter of Michel ACKERMANN, her father and of Marie, her mother, inhabitants of Beinheim in said diocese, the other party, and this with the consentment and the requisition in writing of Mr. DOURNER, commissioner and conductor of the said parties to Louisiana, and in the presence of witnesses to this act. Mark of the groom; Mark of the bride;signature of J. DUMONT; one illegible; and FICHER, parish priest of this place.[2]

Although the names of Joseph Wagenspack and his wife do not appear on the available ship passenger lists, it is almost certain they immigrated to Louisiana aboard one of the ships that left L'orient, France for Louisiana in early 1721. Their inclusion in the group planning to immigrate to Louisiana is specifically mentioned in their marriage record and six months after their marriage, Joseph is listed as the godfather in the baptism of Joseph Duvez, born 29 Jan 1721 and baptized the next day in L'orient.[2] It is also known that Joseph and his wife Anna Barbara settled on their property on the German Coast of Louisiana in 1722, two years before the Census of 1724.[3]

Settling on the German Coast and Raising a Family

The censuses in the following years report the family's progress in their new home. In the 1724 census, "Joseph Wagensbach of Schwobsheim, Upper Alsace," a 23 year old Catholic, and his wife had been living on their place for two years and had cleared one and a half arpents of land for cultivation.[3] By the time of the 1726 census, they had cleared six arpents of land and had one child[3], probably Jean Pierre or Marie Catherine. By 1731, they had three children, two negroes and two cows.[3] Through the use of the parish registers of St. Charles of the post of the Germans, Robichaud believes the three children are Margueritte, Marie Catherine, and [Jean] Pierre, however it is possible that one of the children is Louis rather than Margueritte.[2] A child named Margaretha died at age 2 on 27 Oct. 1739.[2] In an undated census conducted some time after 1732, Joseph Wagenspach still had only six arpents of cleared land. [4] The family probably had not expanded their area of cleared land because the six arpents was all they could cultivate with the resources they had.

Joseph Wagenspach and his wife Anna Barbara Ackermann had the following children:

Joseph Wagenspack, an Alsatian, was buried in the cemetery of the parish church of St. Charles of the post of the Germans on 20 Jan 1741.[2] [5]

Sponsored Search by Ancestry.com
DNA Connections
It may be possible to confirm family relationships with Joseph by comparing test results with other carriers of his Y-chromosome or his mother's mitochondrial DNA. However, there are no known yDNA or mtDNA test-takers in his direct paternal or maternal line. It is likely that these autosomal DNA test-takers will share some percentage (beta) of DNA with Joseph: 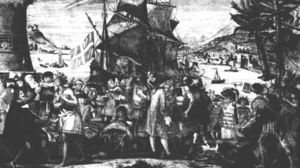