In May 1647, Resolved joined the staff of Governor Peter Stuyvesant. He was an efficient officer to whom Governor Stuyvesant became much attached. In 1654, Resolved obtained from the Dutch Government, of which he was a magistrate, a patent for a tract of land of that portion of Manhattan Island lying between 82nd and 109th streets, extending from North River to East River. He established the first ferry and erected the first Dutch church in that town. Resolved Waldron became a burgher on 17 April 1657, and was made a deputy sheriff the following year. In 1659, he was sent with Heermans to Maryland to vindicate the Dutch title on the Delaware. In 1658, the town of New Harlem had been established on the northern part of Manhattan Island. In 1664, James, Duke of York, sent four ships of war and robbed the Dutch of all their possessions in America. The English took over New Netherlands and renamed it New York.

Resolved retired to private life. He was called back to public life and was appointed constable of New Harlem. The old Waldron stone mansion at Horn Hook, 88th Street, north side and a little east of Avenue A, was erected in 1660 and was in good repair when it was destroyed by fire, 210 years old.

Resolved had a brother, Joseph. Both settled on the North end of Manhatten Island, in New Harlem. Resolved took the Oath of Allegiance in October 1664.[8]

Resolved Waldron was a printer, staff officer of Governor Peter Stuyvesant, magistrate, burgher on 17 April 1657, deputy sheriff, constable of New Harlem. His brother Joseph Waldron was said to be a printer also.[8]

According to Find A Grave, Resolved Waldron was born 10 May 1610 [sic] in Amsterdam, Amsterdam, Noord-Holland, Netherlands; he passed away 17 May 1690 in Horns Hook, Harlem, New York.[9] (Find A Grave has an incorrect birth date.)

"The land claim roots date back to the year 1666 when English Governor Nichols granted all the lands covered by water from Seventy-fourth to One Hundred and Twenty-eighth strrets which included the Morrisania Flats as well as all the man made land between those streets and the entire river bed of the Harlem River from one limit of the grant to the other. The land was granted to Resolved Waldron (who built a house on the High ground), Thomas Delavall, Daniel Turner, John Sorvelen and John Obleene. We don't know much about what Delavall, Turner, Sorvelen or Obleene did with their lands, but Waldron built a house and operated a farm and Samuel Waldron lived on the place during his lifetime."[10]

Rudolph Van Waldron was made a baron in 1128 and granted a coat of arms by the Dutch government. Another publication states this was an English family, the name of repute from the time of the Conquest. In the "Domesday Book", Waldron was companion of Robert, Earl of Moretaine, in Normandy.

The Waldrons were an influential family in England and were among the nobility as early as the 16th century. During the Thirty Years War between Spain and the Netherlands, many adventurous, young Englishmen went to the aid of Holland. For this and for business reasons in 1570, several members of the Waldron family left their homeland and went to Amsterdam.

The Waldrons were an English Puritan family, intermarrying with the Dutch and remaining in Holland for several generations. The name was known in England as early as the time of William the Conqueror and is also spelled Walden, and comes from a village in Warwickshire, England. It is the home of the Walderne family who often lost their "r" in early records, and finally became Waldron. Walden is also found in the County Dorset.[11]

It is said that Resolved Waldron is buried in the Dutch cemetery in Harlem (which was 125th St) in Manhattan. The site of Church and graveyard is currently a bus depot and before that there were tenements on the site.

Disinterrments from the Vaults and Churchyard of the Dutch Reformed Church of Harlem, 1869-1875

Prompted by New York City's northward growth, the Consistory of the Dutch Reformed Church of Harlem purchased a plot in Woodlawn Cemetery in 1869. The remains interred in its old cemetery in First Avenue between 124th and 125th Streets, and also those in the churchyard on Third Avenue and 121st Street, were removed to the plot in Woodlawn; the transfer was completed in 1875. A manuscript file containing documentation relevant to this process has been digitized and made available in the elibrary of the New York Genealogical and Biographical Record.[2][9][12]

Resolved Waldron, perhaps the most noted of the Harlem patentees, respected and beloved by all for his clear judgment, wide experience, and unvarying affability, came from English stock, of the time of William the Conqueror, but was born and raised at Amsterdam, and acquired many of the characteristics of the Hollanders; in fact, so thoroughly Dutch was he in his leanings, that when the English conquered the province, he retired from New York to Harlem, in disgust.

One reason for this, perhaps, rested in the fact that he was a great favorite with Governor Stuyvesant, to whose notice he had come shortly after his entry upon public service in New Amsterdam, in 1657.

On April 17th of that year he was made an overseer of workmen. So conscientiously did he perform his duties, that the Director and Council, in the following year, appointed him Deputy to the Attorney-General, and the Burgomasters were ordered to recognize him as Deputy Sheriff.

Waldron, with his English blood and Dutch training, was the kind of a man who would carry out an order to the letter. He was charged by the Quakers, some of whom he arrested, with being hard-hearted. But how his obedience must have appealed to Governor Stuyvesant, one may imagine who has read the story of Stuyvesant's constant insistence upon the enforcement of obedience.

Waldron visited, upon public errands, every part of the province, and even the neighboring colonies; and, in 1659, was sent to Maryland to vindicate the Dutch title on the Delaware. The next year the Directors in Holland would have made Waldron Sheriff of the towns on Long Island, had it not been for the Governor, who insisted that he could not spare him.

"Respecting the person, (Resolved Waldron)," said the Governor, "we may be permitted to remark, that when appointed as a deputy to the fiscal and as Schout-by-nacht in this city, he conducted himself with so much fidelity and vigilance, that he gave to us and the magistrates great satisfaction, so that his services...[13]

Sponsored Search by Ancestry.com
DNA Connections
It may be possible to confirm family relationships with Resolved by comparing test results with other carriers of his Y-chromosome or his mother's mitochondrial DNA. Y-chromosome DNA test-takers in his direct paternal line on WikiTree: It is likely that these autosomal DNA test-takers will share some percentage of DNA with Resolved: 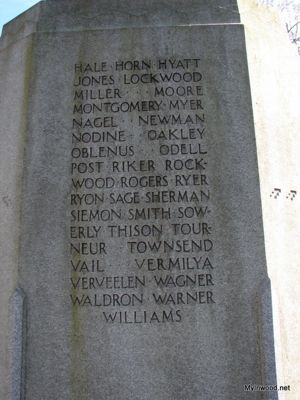 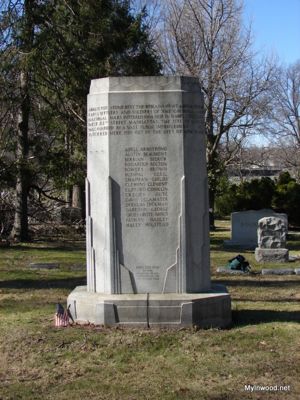 Persecution of Early Friend or Quaker 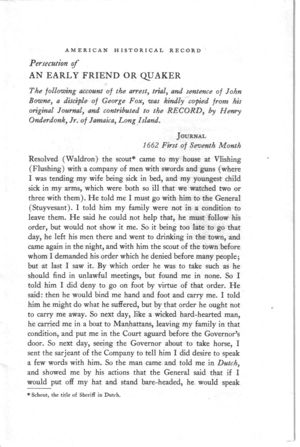 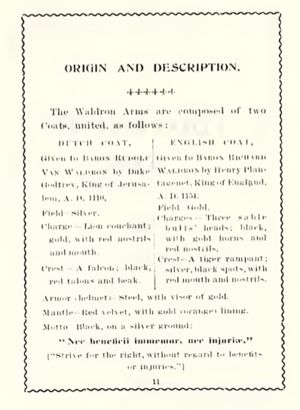 Leave a message for others who see this profile.
There are no comments yet.
Login to post a comment.
Jan Terink
These are the 1645 AND 1654 marriage proclamations, both in Amsterdam.

Carrie Quackenbush
Waldron-914 and Waldron-2 appear to represent the same person because: This is the oldest paternal ancestor in this chain in need of a merge into the NNS PPP. No tree conflicts. Thanks!
posted Jun 29, 2016 by Carrie Quackenbush

Carrie Quackenbush
Removing Maria Goverts-1 as a mother. As discussed in this thread, she is actually the mother-in-law of Resolved's brother Joseph's wife Annetje.
posted Jun 07, 2016 by Carrie Quackenbush

Carrie Quackenbush
Waldron-968 and Waldron-2 appear to represent the same person because: This is the oldest paternal ancestor in this chain in need of a merge into the lowest NNS PPP. No tree conflicts. Thanks!

They are different birth dates and places but there was only one Resolved Waldron in the Netherlands before coming to New Netherlands. His birth record has not been located and his parents emigrated from England to Netherlands so it could go either way. Neither profile has a source for his actual birth. There is more information in the NYGBR discussed in the g2g topic linked from this profile.

The New Netherland Settlers profile opens with "Resolved Waldron was born on 10 May 1610, in Amsterdam, Amsterdam, Noord-Holland, Netherlands; "

Also the other profile is unconnected in every way from any tree.

posted Apr 14, 2016 by Carrie Quackenbush
Wayne Burnie
Waldron-968 and Waldron-2 are not ready to be merged because: i am not certain they are same person different birthdates and places and nothing to positively tie them together
posted Apr 13, 2016 by Wayne Burnie

Carrie Quackenbush
Waldron-968 and Waldron-2 appear to represent the same person because: This is the oldest paternal ancestor in this chain in need of a merge into the NNS PPP. No tree conflicts. Thanks!
posted Apr 13, 2016 by Carrie Quackenbush

Steven Mix
Waldron-769 and Waldron-2 appear to represent the same person because: This is the oldest paternal ancestor in this chain in need of a merge into the NNS PPP. No tree conflicts. Thanks!
posted Sep 21, 2015 by Steven Mix

Steven Mix
Waldrun-2 and Waldron-2 appear to represent the same person because: This is the oldest paternal ancestor in this chain in need of a merge into the NNS PPP. No tree conflicts. Aka Waldrun. Thanks!
posted Sep 06, 2015 by Steven Mix

Steven Mix
Waldron-388 and Waldron-2 appear to represent the same person because: This is the oldest paternal ancestor in this chain in need of a merge into the NNS PPP. No tree conflcits. We should probably keep the match name Resolvert Williamse Waldron, rather than the current Resolved. But that implies that he had a father William, whcih is not consistent, so it needs further study. Also, the match has him born in Amersterdam, Noord Holland, rarther than England. This English family moved to the Netherlands, but the dates for this move and birth would have to be reconciled later. Also, it is not clear if this man or his father is the immigrant. If the father died at Waldron Hall in England, then it is not clear that this son was born in Amsterdam? So these are a few things in need of later study and correction. Thanks!
posted May 05, 2015 by Steven Mix

Steven Mix
Waldron-760 and Waldron-2 appear to represent the same person because: This newly created duplicate is okay to be merged into the NNS PPP. No tree conflicts. Thanks!
posted Mar 09, 2015 by Steven Mix