Jimmy Walker was born and raised in New York, though not, as is a common misconception, from a poor family. He was from a Greenwich neighborhood and attended Xavier College and New York Law School.

His father encouraged him to enter politics. He worked his way through local political circles and in 1926 he became Mayor of New York City.

He is now perhaps the most romanticized figure in New York City political government history. Memories of him have photo-shopped in our minds to glossy recollections as sparkling as the mayor's own eyes. He is remembered as much for his Jazz tunes as his policy.

The 1920's were know as the "roaring 20's" and nowhere were they as roaring as in New York City. The economy was good and the people were in a state of constant indulgence. The government, in an effort to discourage what was seen as a moral decline, passed the Volstead Act, which banned the sale of alcohol.

Attendance at nightclubs, bars and other public drinking establishments had become commonplace. Prohibition, as it was known, was not popular, or, under Mayor Walkers administration, enforced.

To say that Walker simply looked the other way would again be touching-up history. Mayor Walker dealt with the law of New York by day and frequented the speakeasies by night.

Being Prohibition, you would think that outrage on the part of the people would follow such a prominent figure being engaged in this behavior. Surprisingly they didn't. Even when he abandoned his wife for a showgirl, a move that we would think would elicit outrage, the public still was squarely on his side.

Perhaps people viewed him as one of them, he seemed to be in touch with what the every-man of the time needed. Maintaining the five-cent subway fare, passing legislation that legalized Sunday entertainment, including baseball and boxing. They came to him outraged about everything from government salary increases to nude-girl establishments. He just smiled and hummed a tune.

At a time when government was publicly denouncing the moral decline of the country and encouraging a return to church-going and abstaining from alcohol, the mayor was capturing the admiration of the working class of NY. This was truly the time of "anything goes" and in New York; it all went.

But alas, all good things come to an end. And as the twenties were nearing the end, so was the economic and social boom of the era. The stock market crashed, and the lifestyle of the swinging twenties came to an end, as did Mayor Walker’s ability to operate above the law.

Everyone was looking for someone to blame somewhere. In NY that someone would be Mayor Walker. Elected officials, legislatures, down the line to the cardinal demanded something be done, starting in city hall. Walker's entire city government was in hot water. He was called to answer for his role in the corruption of city hall and in September 1932, Walker resigned as Mayor.

After resigning he left New York to visit Europe, divorced his wife and married his showgirl. He returned in 1935 and divorced again soon after.

In 1940 Mayor Fiorello D. LaGuardia appointed Walker labor arbitrator for the garment industry. His continued charm kept him in the public eye as a speaker who was both an acute businessman, and showman.

James J. Walker died on November 18, 1946 at the age of sixty-five.[1] He is remembered for his smile, and song and is immortalized by a city park bearing his name, and his life story was even made into a movie. 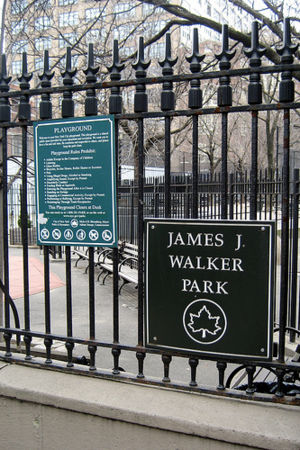