Lavinia was born in Ireland in July 1867, the daughter of John Walker and Leah McCracken.[1][2]

She emigrated to Canada in 1881[1] and moved to the Columbia Valley in British Columbia. There she met and married Ed Watkins in 1896.[3] They had five children and continued to live on the homestead near Brisco in the Columbia Valley.

She passed away in 1943.[2] and was buried in the Saint Mark Cemetery in Spillimacheen, East Kootenay, British Columbia.

Lavinia Walker, my Granny was born on July 1, 1867 at Muff (historically spelt Mough, from Irish: Magh) in County Donegal, Ireland. Lavinia was the daughter of John and Leah Walker. Muff this is very small picturesque village It is near the mouth of the River Foyle (where it flows into Lough Foyle) and sits at the border between the Republic of Ireland and Northern Ireland. The Main Street [High Street] is probably two or three blocks long. It has a very small Church of Ireland where many of the tombstones in the churchyard have the name Walker on them.

Times were probably hard so to make things easier Lavinia who was 11 or 12 and her brother, Joe left for North America. They eventually settled in California.

In California, Lavinia and Joe went to San Francisco where Joe started a bakery and Lavinia kept house for him. She told the story of the peddler coming around selling oranges and she said she would take a dimes worth expecting to have two or three to eat. She said I'll just put them in my apron and the peddler said she'd need something bigger that. She brought out a dishpan and he filled it. Joe was married and lived there until he died in the 1940s. His bake shop was destroyed in the San Francisco earthquake of 1906 and he had to rebuild.

When her brother got married, Lavinia, who was a strong individual, set out for Vancouver. While living here she worked for the owners of the Rogers Golden Syrup Company as a nanny. Taking the first train through the Rogers Pass she arrived in Donald and she went to work for a family called Baker looking after the children.

In the summer, they used to go up to Glacier House which was a large hotel for travelers and mountain climbers. While on vacation at Glacier Park, she met a young lady who was to become a life-long friend, Edith Gilliam. About 1895, Edith met and married Kerry [Shorty] Atchison. Lavinia being bridesmaid. In the fall of 1895, Lavinia came up to visit Edith and that was when she met Ed Watkins and then they were married April 1 1896. The minister rode horseback all the way from Donald to Brisco to marry them.

It wasn’t long before the Watkins’ family began to grow with the arrival of their first son, John on January 19th 1897 in Golden. He was the only Watkins baby to be born in Golden. All the rest were born on the farm at Brisco. The following year another son, Charles (Charlie) Leonard was born on April 25, 1899. Granny and Grandpa’s only daughter, Ann (Annie) Elizabeth came into the world on February 14, 1902. Then my Dad, Joseph Edward (Joe) was born on March 21st, 1903. Almost 9 years later another son, Walter William Lloyd George (Lloyd) was born on January 15, 1912. It is my understanding that during the years between my Dad’s birth and Lloyd’s Granny gave birth to twins. Unfortunately they did not survive their birth.

In those early days grandpa added a number of the buildings, among them were a hay/cow barn, a garage, blacksmith shop and a very large building for storing machinery. He also planted an apple orchard on some land that he had been cleared of trees in bushes. For many years grandpa cleared land and planted it with alfalfa, hay and wheat. He soon exceeded his need for hay and began selling it to other farmers and ranchers.

Joseph and Lavinia Walker both have the birth year of 1867, too close together for siblings. They both came to America at a very young age without their parents and one or both may have fudged the dates.

Is Lavinia your ancestor? Please don't go away!

ask our community of genealogists a question.
Sponsored Search by Ancestry.com
DNA
No known carriers of Lavinia's DNA have taken a DNA test. 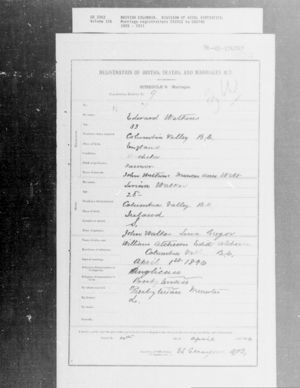 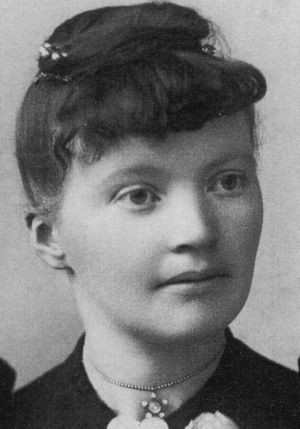 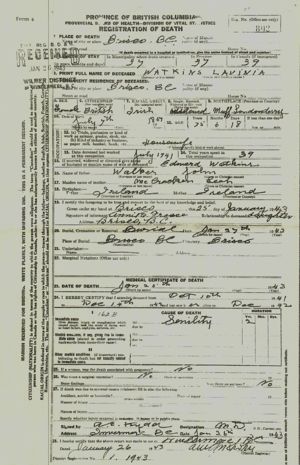