"Johann Peter Wamboldt and his family lived at Lot B-8, which he got from his father's will in 1785. His baptism is recorded in the St. John's Anglican Church Records of Lunenburg."

Images: 1
Generation 7 of a Genealogy 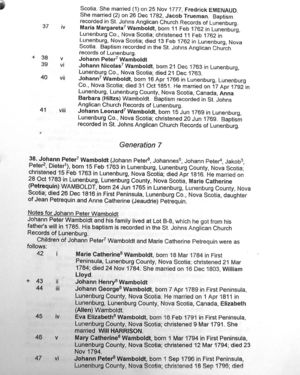 David Jenkins
Wamboldt-87 and Wambold-103 appear to represent the same person because: the same guy
posted Apr 12, 2020 by David Jenkins