According to the research of Kenneth Paulsen[1] John Wambolt and Anna Magdalene Croft has the following children;

There is however, no record of George Solomon Wambolt (born 1839) in Paulsen's research. There are a few possibilities, he could be the son of John and Anna, he could be John Henry's illegitimate son, or he could have been adopted by the family.

We had December 19, 1815 as his death date. That is what appears in the page attached. But it is also his marriage date. John's children were born in the 1820s, e.g. as transcribed on his son's Leonard's marriage certificate, the father is John Wambold, mother is Ann. I'm removing the death date. Whitten-1 17:26, 21 April 2017 (EDT)

Images: 1
Generation 8 of a Genealogy 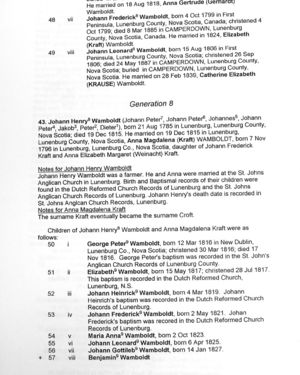