Note: WikiTree's Native Americans Project uses the required last name at birth field to record the tribe name of indigenous individuals who lived prior to their adoption of surnames.

Massasoit, a Pokanoket Wampanoag Indian, was born about 1580 in the Massachusetts Bay area. His parents are unknown, but he had two brothers, Akkompoin and Quadequina. "Massasoit" was probably a title; by 1632 he is often referred to by the name of "Ousemequin” (Yellow Feather). [1] The Wampanoag did not have a written language, so he is known primarily through the writings of men like William Bradford and Edward WInslow.

European visitors to New England brought European diseases with them, and between 1615 and the arrival of the Pilgrims in 1620 as much as 90% of the Massachusetts Bay area Indian population had been wiped out. By 1620 when the Pilgrims arrived the remaining Wampanoag were under a great deal of pressure from the Micmac to their north and the Narragansett to their south.[2] Massasoit was the sachem or leader of the Wampanoag and although they feared further disease from the new settlers, they also saw the English as possible allies.

The first meeting between the Plymouth colonists and Massasoit is recorded in Bradford's History of 'Plimouth Plantation:'

“But about ye 16. of March a certaine Indian came bouldly amongst them, and spoke to them in broken English, which they could well understand, but marvelled at it.... His name was Samaset; he tould them also of another Indian whos name was Squanto, a native of this place, who had been in England & could speake better English then him selfe. Being, after some time of entertainmente & gifts, dismist, a while after he came againe, & 5. more with him ... and made way for ye coming of their great Sachem, called Massasoyt; who, about 4. or 5. days after, came with the cheefe of his freinds & other attendance, with the aforesaid Squanto. With whom, after frendly entertainment, & some gifts given him, they made a peace with him (which hath now continued this 24. years) " [3]

Most American school children know of Massasoit because of the help which saved the Pilgrims from starvation and death and images of the event called the "First Thanksgiving," but it is the 1621 treaty that insured Massasoit's place in American history. [4] The treaty pledged mutual support and respect between the English and the Wampanoag. The Wampanoag continued to maintain peace with the English colonists for the next fifty years although they received little in return and were pressured to cede more and more of their land.

The 2011 Native American dollar coin issued by the U.S. Mint memorializes this treaty. [5]

"In his person he is a very lusty man, in his best years, an able body, grave of countenance, and spare of speech. In his attire little or nothing differing from the rest of his followers, only in a great chain of white bone beads about his neck, and at it behind his neck hangs a little bag of tobacco, which he drank and gave us to drink; his face was painted with a sad red like murry, and oiled both head and face, that he looked greasily. All his followers likewise, were in their faces, in part or in whole painted, some black, some red, some yellow, and some white, some with crosses, and other antic works; some had skins on them, and some naked, all strong, tall, all men of appearance . . . [he] had in his bosom hanging in a string, a great long knife; he marveled much at our trumpet, and some of his men would sound it as well as they could try." [6]

Massasoit became very ill in March of 1623 and the colonists received word that he had died. Learning that he was not in fact dead, Winslow went to his home. In his "Good newes from New-England" Winslow described in great detail the actions that were being taken to save Massasoit. Winslow dosed him with a "confection" and when Massasoit recovered Winslow took credit for curing him. [7]

Massasoit is believed to have had five children, birth order uncertain: [8]p. 210

The 1621 peace treaty between the English settlers and the Wampanoag, renewed in 1639, lasted beyond the death of Massasoit.

"The death of Massasoit is thought to have occurred in or about the year 1661, or some forty years after the landing of the Pilgrims at Patuxet, now Plymouth. Mr. Drake, in his excellent history of the Indians, says that Massasoit was alive as late as September, 1661, and we think he must have died in the last part of that year, or very early in 1662, as in the latter year he was succeeded by Wamsutta, his son, as chief of the Wamponoags."[8][p. 39]

Soon after the death of Massasoit, Wamsutta and Metacomet went to Plymouth and requested the colonists to give them English names. [12] The court named them Alexander and Philip. Wamsutta (King Alexander), the eldest, became sachem of the Pokanoket on the death of his father. Wamsutta died within a year, and his brother Metacomet (King Philip) succeeded him in 1662.

Massasoit was believed to be buried at Burr's Hill in Warren, Rhode Island, but over the years the burial area was vandalized and damaged by construction activity. Human remains and artifacts were removed to several museums. Under the Native American Graves Protection and Repatriation Act, the Mashpee Wampanoag tribe was able to reclaim funerary objects and remains believed to be those of Massasoit. They were reinterred at Burr's Hill on May 13, 2017.[13]

The following are quotes from Drake’s 1841 “History of the Indians”:

"MASSASOIT, chief of the Wampanoags, resided at a place called Pokanoket or Pawkunuawkin, by the Indians, which is now included in the town of Bristol, Rhode Island. He was a chief renowned more in peace than war, and was, as long as he lived, a friend to the English, notwithstanding they committed repeated usurpations upon his lands and liberties.[14][p. 17]

"11 December 1620, O.S., the pilgrims had arrived at Plimouth, and possessed themselves of a portion of Massasoit's country. With the nature of their proceedings, he was at first unacquainted, and sent occasionally some of his men to observe their strange motions. Very few of these Indians, however, were seen by the pilgrims. At length he sent one of his men, who had been some time with the English fishing vessels about the country of the Kennebeck, and had learned a little of their language, to observe more strictly what was progressing among the strangers at his place of Patuxet, which these intruders now called Plimouth. This was in March 1621."[14][p. 21]

Sponsored Search by Ancestry.com
DNA
No known carriers of Massasoit's DNA have taken a DNA test. 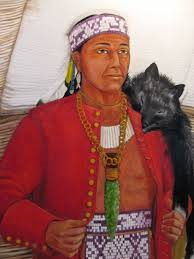 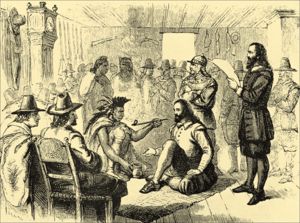 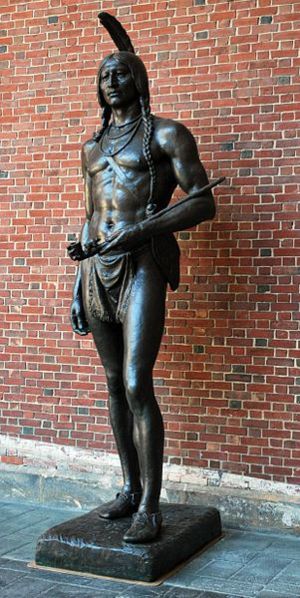 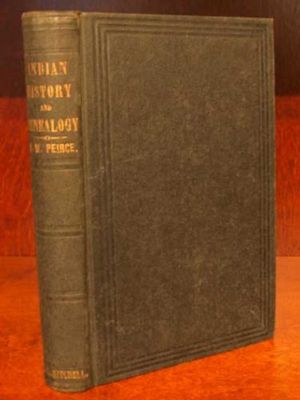 Leave a message for others who see this profile.
There are no comments yet.
Login to post a comment.
Thomas Tolbert PhD
Happy Thanksgiving e/Wiki-Friends!

Please consider: "This Land Is Their Land: The Wampanoag Indians, Plymouth Colony, and the Troubled History of Thanksgiving" By David J. Silverman, Bloomsbury Press (2019).

Happy reading, and perhaps an opened perspective. I celebrate being only 33 steps from Massasoit with only 3 being via marriages).

We plan on featuring Massasoit as the Example Profile of the Week in the Connection finder on November 25th. Between now and then is a good time to take a look at the sources and biography to see if there are updates and improvements that need made, especially those that will bring it up to WikiTree Style Guide standards. We know it's short notice, so don't fret too much. Just do what you can. A Team member will check on the profile Tuesday and make changes as necessary.

Jillaine Smith
Thanks, Abby. We've been working on the profile and those connected to it for the last week. Much improved. There may still be some problematic branches a few generations down, but I think it's good to go. Maybe, as a result of the feature, others will discover things we missed...
posted Nov 23, 2020 by Jillaine Smith

Kathie (Parks) Forbes
I have put a lot of time into this profile looking for contemporaneous sources and rewriting the bio. There are still some items sourced from some books from the 1800s, but I don't have time to do any more digging this week.
posted Nov 23, 2020 by Kathie (Parks) Forbes

Jillaine Smith
Kathie F, I see you're working on this profile, too. How reliable do you think that 1878 history of Massasoit is? It was written supposedly by his descendant.

Kathie (Parks) Forbes
In 1643 the Narragansett leader Miantonomi attempted an alliance with the Pequot and Wampanoag through marriage. His plan was that he would marry the daughter of the Pequot leader, Uncas, and a daughter of Massasoit would be married to Miantonomi's brother Pessacus. Apparently these marriages did not take place, but it does confirm that Massasoit had a daughter of marriageable age in 1643. (Info from Salisbury book)
posted Nov 17, 2020 by Kathie (Parks) Forbes

Jillaine Smith
Not sure what the relevance of the following is to the narrative about Massasoit: "European visitors brought European diseases with them, and between 1615 and the arrival of the Pilgrims in 1620 as much as 90% of the local Indians had been wiped out. By 1620 the Wampanoag were under a great deal of pressure from the Micmac to their north and the Narragansett to their south." (Especially since it's at the very beginning of the narrative. Perhaps it belongs later?)
posted Nov 17, 2020 by Jillaine Smith

Kathie (Parks) Forbes
It's hard to know how much historical context is needed. If disease hadn’t wiped out most of the local tribes the Pilgrims probably would have been driven off. It made sense for the Wampanoag to make peace with the Pilgrams – they were too weak to fight them and having them there for mutual support made the Wampanoag less susceptible to attack from the north or south. K
posted Nov 17, 2020 by Kathie (Parks) Forbes

Jillaine Smith
Got it... I'm tired. Long day. This is looking really good. There are a few places where it would be great to have citations. You'll see. I cleaned up some formatting to make it a bit easier to read, indenting 'graphs and the like. Thanks so much, Kathie. I need to go make dinner now. ;-)
posted Nov 17, 2020 by Jillaine Smith

It appears the LDS site has many sources of Wamsutta Alexander Wampanoag Sachem as being the eldest son of Massasoit.

Jillaine Smith
Thanks Jason, but take a closer look. Most of the sources on his familysearch profile are highly derivative and reference other user-contributed data. Take a look at this page (that is currently under development):

posted Dec 04, 2020 by Jillaine Smith
S (Hill) Willson
It looks like there may be some dups among his children...? I am not well acquainted with the names of theses Indians, but some look very similar.
posted Jul 28, 2020 by S (Hill) Willson

Jillaine Smith
Thanks. Looking into it.

Jillaine Smith
Okay, I *think* I've caught them all. Did some merges directly, proposed others. I have a feeling there are more.
posted Jul 28, 2020 by Jillaine Smith

Jillaine Smith
Profile managers, please add NA project (mailto:wikitree-native-americans-project@googlegroups.com) as a co-manager so the project can monitor changes to this profile. Thank you.
posted Jun 22, 2019 by Jillaine Smith

Lisa (Kelsey) Murphy
Wampanoag-3 and Pokanoket-6 appear to represent the same person because: Same person, name also Cusamequin, "Yellow Feather, better known as Massasoit. reference is found on pgs 24 - 32 in Brave Are My People: Indian Heroes Not Forgotten by Frank Waters, Clear Light Publishers. ISBN: 0-940666-21-9 (I found it in library)

Also mentions Squanto, Metacomet and others such as Mayflower passengers.

As to last name at birth, there weren't any among the Native Americans. I think the proposal of using the tribe name as last name is logical (as opposed to Sachem of the "Wampanoag").