Perkin Warbeck
Born about 1474 in England

Warbeck was a pretender to the English throne during the reign of King Henry VII of England. By claiming to be Richard of Shrewsbury, 1st Duke of York, the younger son of King Edward IV, one of the "Princes in the Tower", Warbeck was a significant threat to the newly- established Tudor dynasty, and gained support outside England.

Henry VII declared Warbeck an impostor and after his capture Warbeck wrote a confession in which he said he was a Fleming born in Tournai around 1474.

Due to uncertainty as to whether Richard of Shrewsbury had died in the Tower of London or had survived, Warbeck's claim gathered some followers, whether due to real belief in his identity or because of desire to overthrow Henry and reclaim the throne. Dealing with Warbeck cost Henry VII over £13,000 putting a strain on Henry's weak state finances.

Warbeck was initially treated well by Henry. As soon as he confessed to being an impostor, he was released from the Tower of London, and was given accommodation at Henry's court.[5] He was even allowed to be present at royal banquets. He was, however, kept under guard and was not allowed to sleep with his wife, who was living under the protection of the queen.[5] After eighteen months at court, Warbeck tried to escape.[5] He was quickly recaptured. He was then held in the Tower, initially in solitary confinement, and later alongside Edward, Earl of Warwick; the two tried to escape in 1499. Captured once again, on 23 November 1499, Warbeck was drawn on a hurdle from the Tower to Tyburn, London, where he read out a confession and was hanged.

Is Perkin your ancestor? Please don't go away!

ask our community of genealogists a question.
Sponsored Search by Ancestry.com
DNA
No known carriers of Perkin's ancestors' DNA have taken a DNA test. 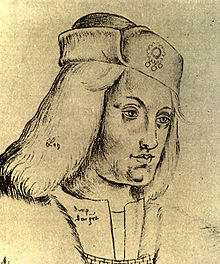 Categories: People Executed by the Tudors | Prisoners of the Tower of London