Julia (Ward) Howe was a part of the Suffragette Movement.

American poet and author, known for writing "The Battle Hymn of the Republic" and the original 1870 pacifist Mother's Day Proclamation. She was a strong abolitionist supporter and social activist, particularly for women's suffrage.

As a child in New York City, Julia received upbringing and education in the homes of eccentric relatives after her mother died in childbirth when Julia was only five. Going between the homes of her zealously Calvinist father and uncle and her social, literary aunt helped to instill in her a lifelong conflict between poetic "indulgence" and an abiding fear of frivolity.

On April 17, 1843 in New York, she married Dr. Samuel Gridley Howe, who founded Perkins Institute for the Blind. The couple had six children and lived in South Boston, Massachusetts.[2][3][4][5][6]

In Boston, where she felt bored and ineffective as a homemaker and her husband adamantly opposed her participation in public life, she began to publish poems and plays anonymously, most of which critics panned as dark, melodramatic, or immoral. Despite his resistance to women's political involvement and his anger towards her unflattering descriptions of him in her writing, Samuel Howe nonetheless allowed his wife to assist him in editing his antislavery paper the Commonwealth and to become involved in the abolitionist cause. On an 1861 trip to visit the Union camps near Washington, she penned her famous Battle-Hymn of the Republic publishing it the following year in the Atlantic Monthly. Set to the tune of the folk song "John Brown's Body," the "Battle-Hymn of the Republic" swept the North within a year, allegedly bringing tears to Lincoln's eyes and bestowing upon Julia Ward Howe unexpected celebrity. It was first thought of in late 1861 while she was in Washington, DC and Union troops during the American Civil War were everywhere. Julia was paid $5.00 for the poem. It was soon set to music by William Steffe and became quite popular. Its legacy has lasted for decades.

She also promoted the idea of Mother’s Peace Day starting in May 1872. This later became the annual month of May Mother’s Day celebration.

She was a featured speaker at the Howe Family Gathering in Framingham, Massachusetts in 1871.

Julie died October 17, 1910 in Portsmouth, Rhode Island. She is buried at Mount Auburn Cemetery in Cambridge, Massachusetts. After her death, a biography put together by her children and published in 1916. It won the Pulitzer Prize for Biography.[1]

ask our community of genealogists a question.
Sponsored Search by Ancestry.com
DNA Connections
It may be possible to confirm family relationships with Julia by comparing test results with other carriers of her mitochondrial DNA. However, there are no known mtDNA test-takers in her direct maternal line. It is likely that these autosomal DNA test-takers will share some percentage of DNA with Julia: 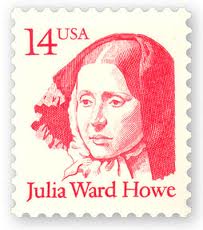 Mrs. Julia Ward Howe at the Age of 90 and Three Generations of Her Descendants 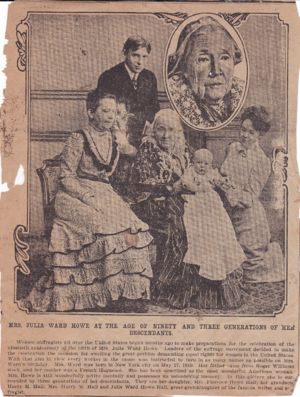 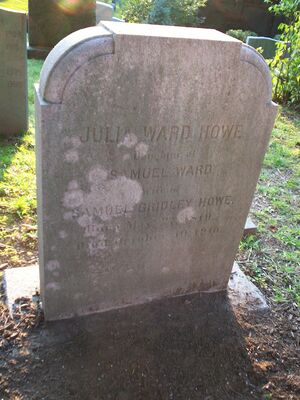 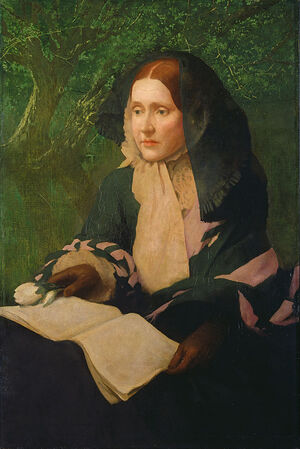