Henry was born in 1834. He was the son of Henry Ward and Elizabeth Chapin.

A geologist, he collected geological specimens from North America, Europe and Africa, specializing in meteorites. He he founded Ward's Natural Science Establishment, supplier of scientific educational materials. His headstone is surmounted by a very large meteorite he recovered in the Georgian Bay area.

Henry Ward has the dubious distinction of being the first people in Buffalo, New York to be killed when hit by a car.[1][2]

Oddly, another scientist with the same surname, Mary Ward, was the first pedestrian in the world to die from being run over by a car. 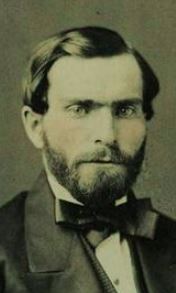