William was an early settler (before 1664) of Hempstead, southwestern Nassau County, on Dutch-ruled western Long Island, as the town was founded by English colonists after purchase from natives in 1643, and then under a patent from New Netherland

He was the son of John Washburn and Martha Timbrell.[1]

He became heir in his father's will on 04 Aug. 1624 in Bengeworth, Worcestershire, England. Strangely, William Wahbourne was NOT named in his mother's will dated 29 Sept 1625.

William Washburn, the immigrant ancestor to Connecticut Colony, and later Hempstead, Long Island, did not join his brother John Washburn in Plymouth Colony. He remained in England, where he raised a large family, and finally sailed with his in-laws to Connecticut,* eventually purchasing land and moving out to Long Island.

* His father-in-law being recorded in Stratford, CT on 10 Oct 1639, suggests that the family had arrived prior to this date.

The earliest record of William Washburn in Hempstead is in 1646 when “William Wasbandt” testified in court that he had sold a sow to a Mr. Stickley, the defendant, in a lawsuit brought by Tonis Nyssen, which was settled on 18 Oct. 1646 at Ft. Amsterdam in the New Amsterdam Colony.[2]

The statement below (citing the 1647 date) is in error*

He was first found in 1647* in Stratford, Connecticut, where he was one of the thirty five men who accepted the invitation of the first seventeen settlers to join them. Settled 1647* Stamford, CT.[citation needed]

* Stratford was founded in 1639 as "the plantation at Pequonnocke",[3] by Puritan leader Reverend Adam Blakeman, William Beardsley, and either 16 families—according to legend—or approximately 35 families—suggested by later research ... By April 13, 1643, the growing town was known as Stratford.[4]

In about 1645 William and Jane Washburn moved to Hempstead, Long Island, supposedly with “Rev. Mr. Leverich.”[5] The earliest record of William Washburn in Hempstead is in 1646 when “William Wasbandt” testified in court that he had sold a sow to a Mr. Stickley, the defendant, in a lawsuit brought by Tonis Nyssen, which was settled on 18 Oct. 1646 at Ft. Amsterdam in the New Amsterdam Colony.[6]

As one of the first purchasers in Hempstead, William Washburn was chosen as a deputy from Hempstead, along with John Seaman, Robert Coe, and John Hicks, to appeal to the British about the Dutch government from the Colony of New Netherlands, assuming jurisdiction over Long Island, and Washburn carried a remonstrance to the Dutch Governor, Peter Stuyvesant, in New Amsterdam, in 1653, regarding the English colonists’ concerns.[7]

In 1653 William Washburn and his son, John Washburn, both purchased land at Oyster Bay, Long Island, from the Indians, as joint purchasers along with Anthony Wright, Robert Williams, Thos. Armitage, Dan. Whitehead, Ric. Holbrooke, William Leverich, and Samuell Mayo. The deed was recorded 27 Mar. 1667 in New York.[8] Also in 1653 William Washburn was a witness to an Indian Deed in Oyster Bay, Long Island, in 1654 he was called “of Hempstead” in a New Haven Colony court record, and in 1654-1655 he was a member of the Assembly at Hempstead.[9]

William Washburn died testate in 1659 in Hempstead, Long Is­land. His will was dated 29 Sept. 1657, and was presented for probate by his widow, Jane Washborne, on 11 June 1659. He mentioned his sons Hope and John, daughters Patience, Hester, and Phebe, who were as yet unmarried, son-in-law Robert Williams’ children, son-in-law Edward Titus, Sara the daughter of Robert Jackson, and son-in-law Richard Willets. His wife had died sometime before him.

He married Jane Nichols about 1625, in Bengeworth or Sedgeberrow, Worcestershire, England[10] daughter of Francis Nichols and Frances Winarke [11] She was baptized on 14 Nov. 1603 in Sedgeberrow,[12] a granddaughter of John Nicholls, of Sedgeberrow.[13]

She has previously been identified as Jane Whitehead. The below is a post by John Maltby himself, on April 13, 2002, on GenForum:

In reply to: Wm. Washburn and wife Jane Whitehead
The wife of William WASHBURN was Jane NICHOLS, not WHITEHEAD. She was baptized on 3 Nov. 1603 in Sedgeberrow, Worcester Co., England, the daughter of Francis NICHOLS and his wife Frances WIMARKE, who were married at Sedgeberrow on 24 Jan. 1599/1600. See the excellent article about this family by Neil D. Thompson, CG, FASG, in "The American Genealogist", Oct. 2000, pp. 267-271, entitled "The English Origin of Sergeant Francis Nichols of Stratford, Connecticut."

William and Jane (NICHOLS) WASHBURN lived in Bengeworth, in the parish of Evesham, Worcester Co., England, which is only a couple of miles from Sedgeberrow. Unfortunately most of the baptismal records for the time period when their children were born have not survived. A few years of Bishop's Transcripts have survived, and from these meager records and the will of William WASHBURN in Hempstead, Long Island, we can piece together their children:

On 5 Dec. 1679 John Washburn, of “Corberry upon Long Island,” eldest son of William and Jane Washburn, gave a receipt to his uncle, Isaac Nicols, of Stratford, for £22 1s 8d “which was the whole amount sent over to me in the year sixteen hundred and seventy seven. I do acknowledge by these presents that I have received the sum and I do forever requit discharge exonerate my said uncle and all his executors administrators of the said sums or any demans upon that amount from me or my heirs executors or assigns…”[31] proving that there was some kinship between the family of Isaac Nichols and John Washburn.

The will of William Washburn of Hempstead (1657): [1] *
I William Washborne doe appoint my well beloved friends and faithfull to be my Overseeres of this my Will and testament I give to my Sonn Hope my six oxen and fower cowes and one horse one mare, and all my Land and devisens with the meadowes belonging thereto, and Barne and home-lott with all instruments of husbandry except one third part of a meadow that my Son John please to have, then he shall paying costs for ye same: Allsoe I give him two sowes, allsoe I give to my daughter Patience three cowes or steeres alsoe I give to my daughter Hester three cowes or steeres and one mare between them bothe. Allsoe I give to my daughter Phebe three kowes or three steeres, these to be paid at their day of marriage yf they carry to the likeing of these my overseeres (yet not to be at theire disposeing). Allsoe I give to my Sonn Robert Williams children the like and to Edward Titus the like, Allsoe I give to Sara the daughter of Robert Jackson one yearling heyfer I give to my Sonn John Washborne one yearling and my morter & pestell at my death, or my wives I give to my beloved wife all the rest or remainder of my Cattle, wth my house and household goods to be at her disposeing, wth this Condition that yf shee remaine unmarried, But yf shee marry, then this is my will that these things shall be at my overseeres disposeing then this is my will, that she shall have fower Cowes, these Cowes to be wintered and summered free but not the increase to remaine to her Item I doe give her one mare & foale, and this howse or another built, Allsoe her firewood cut and brought home, fit for the fire free chardge. I give her ??? bushels of corne, fifteene of wheate, and fifteen of Indian and halfe an Accre of flax sowne and brought home, this to be donn yearly as long as she doth live, Allsoe she shall have all the householde goods at her disposeing, this gift to my Sonn Hope as yf he carry well & to the Likeing of my overseeres My overseeres that I appoint in this bueseines of wright is Mr Leverege, my Loveing wife, My sonn Robert Williams, Richard Willets my Sonnes-in law, I hope you will all of you accept of it, And be Careful yf God take mee Away by death: yf Hope accept of this gift from me he must be carefull (crossed out) be bound to Mannag the things for his mother. I give to my son John twoe ox pasture in the pasture, with five gates in the neck: This is my will and is not to stand in force till they heare of my death, this I acknowledge to be my owne will & testament.

Images: 1
Tablet from Eveshram Abbey, showing the Arms of the Washbourne Family 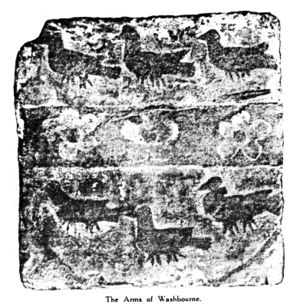 Cheryl (Aldrich) Skordahl
I found that the only Washburn in the Great Migration Directory is John Washburn, supposedly William's brother; William is NOT listed. The biography says that he migrated before 1647; so apparently Anderson also found no evidence that he was in New England by 1640.

The Puritan Great Migration project box should probably be removed, as well as PGM as co-manager.

Jillaine Smith
PGM removed. Profile cleaned up. There was a lot of duplication
posted Jan 06, 2020 by Jillaine Smith

Tom Bredehoft
I have in my possession copy No. 77 of

I would be willing send it to someone who could put it to good use. It is of no value to me but I don't want it to be lost, should it be unique.

Rev Daniel Washburn Jones
There is a substantial amount of redundant information that has been placed under Notes (after Acknowledgements) herein, most of which should probably be removed or incorporated into the main Bio.

If the PM's here would weigh in on this issue, it would be appreciated.

William is 12 degrees from Cecil B. DeMille, 19 degrees from Rosalie Neve and 11 degrees from Henry VIII of England on our single family tree. Login to find your connection.