William Washington is a DAR Patriot Ancestor, A122016.

Lieutenant Colonel William Washington was Wounded in Action during the American Revolution.

William was highly educated. His parents hoped he would become a minister.

Information about this person can be found in a three-part article entitled "Descendents of Two John Washingtons" appearing The Virginia Magazine of History and Biography, Vol. 22, pages 211-14, 328-30, and 437-38.

However, with the Colonies in rebellion, he decided to serve in the military. He started in 1775 as a captain in the Stafford County Virginia Minutemen.

In 1776 he transferred to the Third Virginia Regiment.

In the Battle of Harlem Heights he was wounded.

In the Battle of Trenton, where he fought against Hessian troops, he captured cannons and was wounded in the hand.

He transferred to the cavalry in January 1777 and was made a Major with the Fourth Light Dragoons. There was a near massacre of that group in New Jersey in Sept. 1778.

William was promoted to Lt. Colonel and the command of the Third Light Dragoons in Nov. 1778.

He was transferred to the southern colonies and to do battle with the formidable British Lt Colonel Banastre Tarleton and his Green Dragoons in March 1780 in South Carolina.

Through May 1780 it was battle after battle pushing each side. Through December 1780, Washington and Tarleton battled. After a strong victory at Hammond's Hill by Washington and General Morgan, Tarleton was ordered to chase them down at all costs.

The Battle of Cowpens on Jan. 27, 1781 would be major turning point. An attack on Tarleton caused him to retreat but Washington and his forces chased them. A personal hand-to-hand sword battle between Tarleton and Washington occurred. Tarleton's hand was cut and a shot by Tarleton's pistol grazed Washington's knee and wounded his horse.

By March and April 1781 there were a couple of additional defeats of Major Greene and Lt. Colonel Washington. The Sept. 8, 1781 Battle of Eutaw Springs would be William Washington's last. His horse was shot out from under him. While laying under the horse a British soldier bayoneted him.

As a captured Lt. Colonel, he remained a British prisoner for the remainder of the war in Charleston, South Carolina, until about Dec. 1782 when the British left Charleston.

After the war William settled in South Carolina, became a farmer and horse breeder. He served in the state legislature from 1787 to 1804.

Later served on the staff of George Washington in 1798 as a Brigadier General and helped to protect South Carolina and Georgia.

posted 15 Nov 2008 by Alice Luckhardt
Login to add a memory.
Sponsored Search by Ancestry.com
DNA
No known carriers of William's DNA have taken a DNA test. 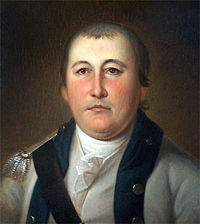 Vincent Piazza
He was transferred to the southern colonies and to do battle with the formidable British Lt Colonel Banastre Tarleton and his Green Dragoons in March 1780 in South Carolina.

"to do battle" doesn't sound correct