William Overton emigrated in 1669 and sent for Mary to work as his maid, with the intention of her becoming his wife.

Mary was a Catholic and William a protestant and they married as such to avoid the wrath of their families.

She married William Overton (b. 03 DEC 1638, Yorkshire, England) at the end of their journey from England 24 November 1670 in Yorktown, York River, Virginia at the age of 15.

These are from an earlier profile and include one that were no longer available on Ancestry.com

Mary Elizabeth Waters Overton was a Roman Catholic, born in St. Sepulchre Parish in London, England, the daughter-in-law of Major General Robert Overton, of the Army of Oliver Cromwell, Lord Protector of England, Scotland and Ireland and Chief Commanding Officer of the Armies.

Samuel was admitted to Freedom of the Skinners of London 3 September, 1639. There was a burial at Newgate, London, England. Mary had a brother John Waters, who migrated to Virginia, a brother Samuel who was married to Margaret, a brother Thomas, and a sister, [1] Elizabeth Overton migrated to Virginia as her husband, William, received a land grant for transporting her and himself to Virginia[2] She came as "maiden" to be a wife. (Meriwether Society and Kindred Families., page 163. See Image above.)

On 23 April 1681, William and Evan Jones were granted forty-six hundred acres lying in New Kent for transportation to the Colony of 92 persons, including William Overton and Elizabeth Overton.[2]

On 29 October, 1690, William Overton and John Lydall were granted 837 acres lying in St. Peter's Parish, New Kent County for the importation of 17 persons.[4] "This is land on which Barbara (Overton) Winston resided at her death in 1766."[5] 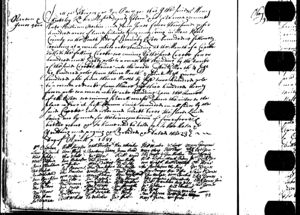 Extract from Josephus, a copy of a copy made by Wm. S Pryor 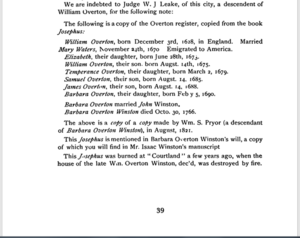 Anne Waters's Will from 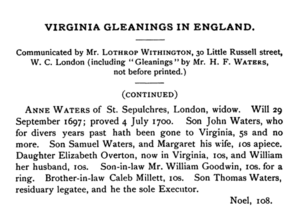 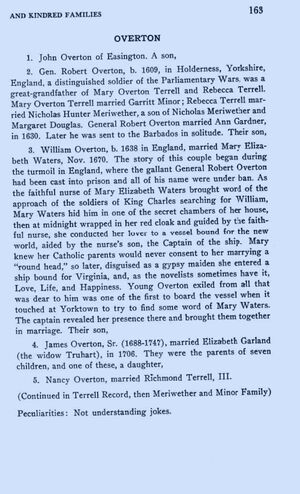