Nina Simone (/ˈniːnə sɪˈmoʊn/; born Eunice Kathleen Waymon; February 21, 1933 – April 21, 2003) was an African-American singer, songwriter, pianist, arranger, and activist in the Civil Rights Movement. She employed a broad range of musical styles including classical, jazz, blues, folk, R&B, gospel, and pop. Later in life she was billed as the High Priestess of Soul. [2]

A gifted musical prodigy, little Eunice Waymon began playing classical piano at an early age: 3 to 4 years old. Aspiring to become a classical pianist, she was encouraged by her Christian family that valued education, literacy & the arts and by local teachers who helped her financially due to her father's poor health & need to support a large family. Her Tryon N.C. music teacher, Mrs. Mazzy Miller, of English descent, who also employed her mother to pay family expenses, set up a scholarship fund for her, thereby enabling Eunice to attend Allen High School in nearby Asheville, North Carolina. Cite error 3; Invalid <ref> tag; invalid names, e.g. too many

At just 12 years old, Eunice Waymon gave her first classical piano recital in Tryon. As Negros, her parents were asked to sit behind White attendees, whereupon she refused to play until they were re-seated in the front. She later reflected that this incident was her first conscious realization of the racism pervasive in her hometown. It inspired her later Civil Rights activism.[3] Eunice Kathleen Waymon grew up to become a world-class jazz, blues and pop musical artist, using the stage name "Nina Simone," originally to hide her identity from her devout Christian parents for whom anything but Gospel or Classical music was un-Godly.

After high school, at 17 years old, Eunice Kathleen Waymon and her parents left North Carolina for Philadelphia, Pennsylvania. Eunice took classical piano lessons at Julliard School of Music for a year in preparation for entrance into Philadelphia's prestigious Curtis School of Music. Unfortunately, the year she applied only 3 of 72 candidates were accepted, not including young Eunice Waymon. She always felt that her rejection was racially-inspired, again fueling her determination to work for equal rights for Black Americans. [4]

Needing to work to pay for her music lessons, Eunice accepted a job at an Atlantic City night-club. She played six hours an evening, six nights a week, for $90 per week. After her first night, the owner told her she must sing jazz & blues as well as play piano to entertain his guests. Her unique soulful, vibrato, contralto voice was born. So that neither Juilliard nor her parents would recognize her night-life gig, she adopted the stage name Nina Simone. Nina was what her Puerto-Rican boyfriend called her and Simone was an "homage" to French actress Simone Signoret, whose liberated life-style Eunice admired.[5]

Nina Simone recorded over 40 records during the next 25 years including a hit-single "I Love You, Porgy" from the noted opera "Porgy & Bess" in 1958. She also signed a disadvantageous record contract for her first album; Little Girl Blue, so that it only netted her $3,000 but made hundreds of thousands for the record label, especially in re-editions. Her parents returned to North Carolina and she moved to Greenwich Village, Manhattan, New York City, where she became an "icon" of the 1960s "Off-Off-Broadway" scene, playing clubs and making jazz, pop, rhythm & blues and even rock & roll recordings, often blending styles and adding a touch of the classics, particularly Johann Sebastian Bach melodies. [6]

In 1958, at 25 years old, she briefly married Donald Ross, a New York City beatnik who worked as a fairground barker. She soon regretted her choice and the marriage was dissolved. On 4 December 1961 she married a Harlem New York City police detective, Andrew "Andy" Stroud. Seven years her senior, he had already been married two times before. They had a daughter, Lisa Celeste Stroud, born on 12 September 1962 in Mount Vernon, Westchester, New York. Andy Stroud left the NYPD to become her manager in February 1963. Nina later accused him of having been abusive to her from their wedding day and they divorced in 1970. He passed away on 14 July 2012 in Riverdale, Westchester, New York.[7]

It was during her tempestuous marriage to Andy Stroud that Eunice / Nina became a vocal spokeswoman for the emerging Civil Rights Movement both in the United States and abroad. Incensed by the racially-motivated murders of NAACP activist Medgar Evers in Mississippi in June 1963 followed by 4 Black schoolgirls killed in a bomb blast at a Birmingham, Alabama church, Nina wrote the vitriolic song: "Mississippi Goddam". Her song challenged the belief that race relations could improve gradually and peacefully. In 1965 she took part in the Civil Rights march from Selma to Montgomery, Alabama, and called America "A country full of lies". She came to espouse a radical Black Power agenda, akin to her New York neighbor, Malcom X, rather than Rev. Martin Luther King's non-violent approach to racial injustice. This, and her fiery temperament, harmed her musical career as record companies became reluctant to sponsor such overt calls to violence and revolution. Nonetheless, she was deeply moved by the 4 April 1968 assassination of Rev. King in Memphis, Tennessee, dedicating her April 1968 performance at the Westbury Music Festival to him. She recorded "Why? (The King of Love Is Dead)", a song written by her bass player, Gene Taylor there. [6] [1]

Fed up with an America increasingly caught-up in the Viet Nam conflict, having failed to establish racial justice, Nina Simone left the United States in September 1970, flying to Barbados, West Indies. Later she claimed she had not intended to desert her family in New York, but, finding she had left her wedding ring behind, Andy Stroud decided to divorce her. As he was still her manager and in charge of bookings and recording payments, this left Nina in dire financial and emotional straits. On her way back to New York, Nina discovered there was a warrant for her arrest due to her earlier refusal to pay Income Taxes that supported the Viet Nam conflict, so she hastily returned to Barbados, where she then had a public affair with that country's Prime Minister, Errol Barlow. South-African singer-activist Miriam Makeba, a close friend, eventually persuaded Nina to move to Liberia, a West Africa nation that had been founded by freed American slaves in the 1840s. [6]

When Nina Simone left the USA, relocating to Barbados & then to Liberia, she abandoned her young daughter, Lisa Stroud, b: 1962, who had remained in Mount Vernon, New York, without telling her where she was. When they finally reunited and her now-teenage daughter started living with her mother in West Africa, their relationship turned violent. Lisa stated:

“She went from being my comfort to the monster in my life... Now she was the person doing the beating, and she was beating me.”

The abuse became so unbearable that Lisa Celeste Stroud finally moved back to Westchester, New York to stay with her now-remarried father. Later, Lisa once again restored peace with her mother and eventually she took to calling herself "Lisa Simone" as a musical-comedy singer and actress. [8] [9]

Nina Simone recorded her last album for RCA, called It Is Finished, in 1974. She did not record another until 1978 when CTI records put out Baltimore, that received critical acclaim but not a large following; nonetheless it marked something of a "come-back" for her artistically. During the 1980s, she moved frequently, passing between Liberia, London, Switzerland and finally settling in Paris, France, where she recorded an album, Fodder on My Wings, in 1982 at Studio Davout. She spent most of the next six years in the French capital, playing & singing at Latin Quarter clubs and sinking into alcoholism so that she often was too drunk to perform more than for short periods. [1]

In 1988, some of her European friends, especially Gerritt de Bruin, a Dutchman, helped her move to the Netherlands where a friend of de Bruins diagnosed her officially with bi-polar disorder. His medical recommendations benefitted her immensely and she entered into a more-settled period, moving up to Amsterdam with a more-active social life, in 1990. In 1992 she released her autobiography, "I Put A Spell On You," with Stephen Cleary, published in New York City.[6]

In 1993, 60-year-old Nina Simone made her final world-traveling move, south from Holland to France's sunny Mediterranean coast to the seaside village of Carry-le-Rouet, about 20 miles west Marseilles in Provence. That same year she recorded her last album, A Single Woman and contributed songs for the 1993 film soundtrack to "Point Of No Return." [1]

On July 24, 1998, she was a special guest at Nelson Mandela's 80th birthdate party, and on October 7, 1999, she received a Lifetime Achievement Award. At one of her final American appearances in 1998 in Newark, New Jersey, she announced: "If you're going to come see me again, you've got to come to France, because I am not coming back." [10] Always a faithful daughter, she did return for her mother's North Carolina funeral in 2001 but virtually incognito. At about the same time, she developed breast cancer, which she bravely fought from her home in the south of France, until she passed away in her sleep at Carry-le-Rouet, Bouches du Rhone, Provence, France, on 21 April 2003. [1]

Following her wishes, her public funeral was held in her seaside Mediterranean village of Carry-le-Rouet on 25 April 2003. Hundreds of mourners of many nationalities, races, and faiths attended, including her friends South African singer-activist, Miriam Makeba, and American pop artist, Patti LaBelle. Elton John sent a floral tribute. The service began with a touching rendition of the late Jacques Brel's "Ne Me Quitte Pas" ("Don't Leave Me"), a pop classic that Nina had made her standard in later-year performances. Memorial services were later held in New York City and her hometown of Tyron, North Carolina, USA. [11]

At her request Nina Simone's body was cremated privately in Marseilles and her ashes scattered in several African countries. [12]

Is Nina your relative? Please don't go away!

ask our community of genealogists a question.
Sponsored Search by Ancestry.com
DNA
No known carriers of Nina's ancestors' DNA have taken a DNA test. 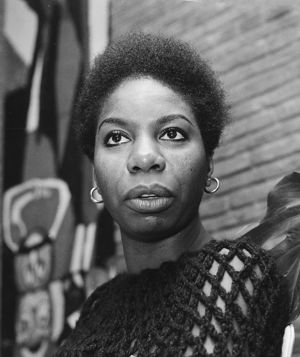 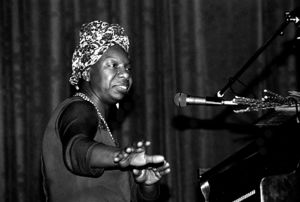