Karl Emil Maximilian Weber was born in 1864, in Erfurt, Province of Saxony, Prussia. He was the oldest of the seven children of Max Weber Sr., a wealthy and prominent civil servant and member of the National Liberal Party, and his wife Helene (Fallenstein), who partly descended from French Huguenot immigrants and held strong moral absolutist ideas. Weber Sr.'s involvement in public life immersed his home in both politics and academia, as his salon welcomed many prominent scholars and public figures. The young Weber and his brother Alfred, who also became a sociologist and economist, thrived in this intellectual atmosphere. Weber's 1876 Christmas presents to his parents, when he was thirteen years old, were two historical essays entitled "About the course of German history, with special reference to the positions of the Emperor and the Pope", and "About the Roman Imperial period from Constantine to the migration of nations". In class, bored and unimpressed with the teachers – who in turn resented what they perceived as a disrespectful attitude – he secretly read all forty volumes of Goethe, and it has been recently argued that this was an important influence on his thought and methodology. Before entering the university, he would read many other classical works. Over time, Weber would also be significantly affected by the marital tension between his father, "a man who enjoyed earthly pleasures", and his mother, a devout Calvinist "who sought to lead an ascetic life".

ask our community of genealogists a question.
Sponsored Search by Ancestry.com
DNA
No known carriers of Max's ancestors' DNA have taken a DNA test. 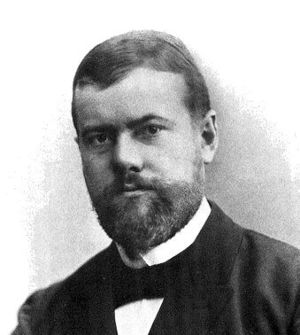 Brian Stump
Weber-3830 and Weber-1892 appear to represent the same person because: Accidentally made a duplicate of Max... Didn't find the old one because searching just "Max" didn't find it. Should have "Max" as preferred name. Thank you for making this. Please merge.
posted Oct 30, 2015 by Brian Stump

Max is 43 degrees from Donald Howard, 37 degrees from Julia Howe and 38 degrees from Henry VIII of England on our single family tree. Login to find your connection.