John Webster's origins are unknown according to Robert Charles Anderson's Great Migration Project.[1] Theories that his father was Thomas or Matthew have not been substantiated.

Some information moved from the Biography of John Webster, Governor of Connecticut. These two individuals with the same name have been confused.

He migrated to Massachusetts by 1634 (there is no record of passage) and was admitted a freeman in Boston 4 Mar. 1634/5.[1] By 1639, he had received land in Ipswich, where his wife's brothers were living. He was admitted as a commoner by that town on 23 Feb. 1644/5 and his occupation was given as baker.[2] He had previously been admitted an inhabitant of Salem in 1637 and had a grant of land. He was a witness in the Essex court in 1639 and applied for land at the Creek in 1642.

"Inventory of John Webster's lands and goods sworn to 29: 7: 1646, by his widow, Mary Webster, who is appointed administratrix

Petition of Mary, widow of John Webster, that her eldest son, John, should have the land called the farm, of about 32 acres, which lyeth between Mr Rogers oxe pasture and Thom. Bishop's famr, when he is twenty-one yeares, he to pay Nathan, the youngest child, 5 li. at fourteen years, or if he refuse, then the 1-4 part of that land in kind or worth; that Mary, Stephen and Hannah may have the island bought of the widow Androws, in equal portions, when they shall be twenty-one; the Elisabeth, Abigail and Israell have 20 nobles each, when twenty-one; the dwelling house and 6 acres of land tied to make it good. The Court Nov. 4, 1646 granted that the estate be ordered as the widow desired and appointed her administratrix, to give bond for security in such sum as the next Ipswich court shall approve and receive of her the inventory amounting to 147 li. 5s.

John Emery of Newbury married Mary, widow of John Webster, late of Ipswich and she had power from the Court to administer and dispose of his goods to his children. Some of the children now grown, almost ready to receive their portions, John Emery petitions for liberty to sell the Island which is devided to three of the children, and also the house and 6 acres of land which was bound to make good the 20 li. to the other three, and upon grant of this, binds himself to pay the children the full price he shall sell it at, and to the other three children, who are to have 20 nobles, to make good to them the 8 li apiece and to pay the daughters their portions at eighteen and the sons at twenty-one years.

"Israell and Nathan Webster, sons of Jon. Webster, deceased, presenting their desires in writing, together with their mother's consent, with Jon. Cheny, Sr., Robt. Long and Wm Elsly as witnesses, and said Israell Webster being present in court and manifesting his desire also, that his father-in-law Jon. Emory and brother-in-law Jon. Emory, jr., might be appointed guardians, the court 25 : 9 : 1662 appointed them guardians, and also ordered that the bond given into Ipswich court for security for the children's portions remain in full force.

In 1663 their daughter Elizabeth was in court:

"Elizabeth Webster for taking a faulse oath. The sentence of the court is that she shall stand at the meeting house dore at Newbury the next lecture day from the ringing the first bell, until the minister be ready to begin prayer with a paper on her head, written in capitall letters, (FOR TAKING A FALSE OATH IN COURT) the constable to see it done, or else to paye a fine of five pounds to the treasurer, and to be disabled from taking an oath, and to pay cost and fees. She made choice to stand at the doore."[5]

All the Webster children were remembered in John Emery's will and referred to as "his dear children".

His wife Mary was a sister of John Shatswell, who mentioned her in his will. He died before Nov 4, 1646, when the Court gave admin to the widow Mary. [6] leaving four sons and four daughters. The family subsequently moved to Newbury when their mother married John Emery.

See the mother's will under Emery. [7] 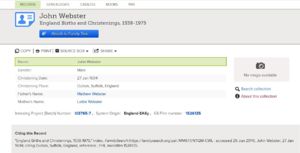 David Bailey
Surely Hannah (Emmerson) Glasier should be removed from these parents. Probably the same for Thomas Webster. There is no evidence presented for either, and there is contrary evidence for Hannah.
posted Mar 07, 2020 by David Bailey

Anne B
Hannah has been removed and Thomas (now John) is set to merge away
posted Mar 08, 2020 by Anne B

Jillaine Smith
Helen B E, you just changed the birth data. It looks like you're relying on Find a Grave but a) I don't see a link to Find a Grave and b) we don't use that as a source for vitals data. I do also see that date mentioned, without source, in the narrative, but associated with different parents than attached here.

Which leads to my next question. Back in November, parents were attached without discussion by someone else. What's the source for these parents? Lacking any solid source, the birth specifics and the parents need detaching. Thanks.

Jillaine Smith
Found the FaG link. There is no source there for the birth.
posted Jan 29, 2020 by Jillaine Smith

Steven Losey
Webster-203 and Webster-10282 appear to represent the same person because: Names and places are the same and his wife is the same
posted Sep 04, 2019 by Steven Losey
Sandi Strong
This bio states that John Webster (webster-203) arrived in Massachusetts in 1634. His daughter mary and son john, jr are reportedly born in 1631 and 1632 respectively, in Massachusetts Bay Colony. Some clarification is needed here, I think.
posted Aug 15, 2019 by Sandi Strong

Becky (Nally) Syphers
Rick, Thank you for your comment about John Webster (Webster-203). The rejected match seemed to be an error. I merged the two profiles, which matched except for one did not have a mother listed.
posted Jun 25, 2014 by Becky (Nally) Syphers

posted May 29, 2014 by Ed Poor
Ed Poor
Parents and sibling entriesThe church record is from Oulton not Ipswich See the marriage extract below https://familysearch.org/pal:/MM9.1.1/NXTL-KZ3. Not a submitter entry but from church register.

Oulton and Ipswich are 40 miles apart. Ipswich is an immigration port Oulton is not.