According to his obituary Robert Wicks/Weeks was born about 1771. His birthplace has not been identified to date.

By 1799 Robert Weeks was married to an Elizabeth (whose maiden name is unknown). There are many errors as to her maiden name being perpetuated in their genealogy, however, nothing has been proven to date.

[2] Quaker records list the births of their children which occurred in Scipio, Cuyaga, New York between 1801 and 1815.

Robert Weeks died on the 5th of October 1848 in Mount Morris, Livingston County, New York while being measured for a new suit.

On the 9th of October 1849 the heirs of Robert Weeks sell, 'the parcel of land situate in the town of West Sparta in the County of Livingston in the State of NY lying in the Township No. Seven in the Seventeenth range of Townships in Phelps and Gorhams purchase and distinguished by being the South Seven Sixteenths of Lot number Eighty Eight containing Seventy Acres of Land more or less. This is sold to John S. Chasey of the Town of West Sparta, Livingston, NY.' [4]

The heirs of Robert Weeks are listed in the document pertaining to this sale as well as their location of residence on the 9th of October 1849. [5]

There are a number of online genealogies that attempt to attach ancestors to this Robert Weeks/Wicks. I have been researching this family for over fifty years. To date I have not seen any documentation as to the parents or grandparents of Robert Weeks/Wicks or his wife, Elizabeth (Maiden Name Unknown). I have entered the available documentation and would welcome good research and documentation that could connect them to the DNA ancestor Francis Weeks. Until that time please be wary of undocumented research naming the ancestors of this family.

Please note that j_WEEKS_a was the original researcher for the material that is listed for Robert Weeks including all of the Quaker Records that have been quoted.. Over the years many people have copied that material without using Judith as the source and then used it in improper ways to connect to spouses and parents without any sources to back it up. This continues to be a problem to this day. Therefore I have not connected Robert Weeks to many of the online sources that claim to have additional information. Any help in resolving this issue would be appreciated. [6] 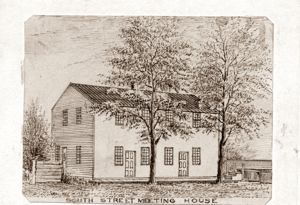 Interior of the Scipio Quaker Meeting House Built in 1810 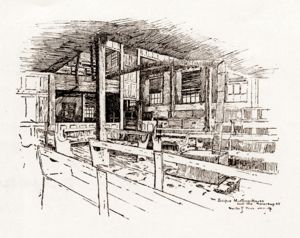 Diana (Weeks) Wykenham
Made contact with Scipio, NY Historian. (Dodie Rowlands) Records were pretty much non existent before the late 1800s. The records of importance from this time would be with the Quakers. He did provide some links for land records. I found no records for Robert Weeks in Scipio, NY.
posted Nov 14, 2019 by Diana (Weeks) Wykenham

Judith (Weeks) Ancell
I would like to see this family line protected until appropriate documentation has been brought to light concerning the ancestors and descendants of this Robert Weeks/Wicks.

There are a number of public trees that show information without documentation. Several of these have used this tree as a source and then extended it both ways. Would someone please help me with this family as far as documentation or help me protect the tree? Thank-YOU! Judith (WEEKS) a

I am looking forward to resuming our correspondence and merging our common ancestor Robert Weeks. Sincerely, Judith

Judith (Weeks) Ancell
No proof has been found that Robert Weeks is the son of James Weeks Sr. I have tried to correct the misinformation on the line of Robert Weeks and Elizabeth (Maiden Name Unknown). Could you please provide accurate proofs so that I can either use the information or would you be kind enough to remove the unproven information? Thank-you, Judith
posted Apr 13, 2017 by Judith (Weeks) Ancell