All three (Joseph, Clementine, & Frank) arrived at New York on October 1, 1883 from Switzerland aboard the Normandie.

Joseph lost his life in a drowning accident at Overcup Creek January 11, 1897.

Clementine continued to live in St Vincent and died April 12, 1944.

St. Joseph Colony, covering land throughout Conway, Faulkner, and Pope counties, served Roman Catholics living along the Arkansas River Valley and the German-speaking Catholic immigrants who later settled these lands. Father Joseph Strub of the Holy Ghost Fathers, a Roman Catholic missionary society, founded the colony in 1878. St. Joseph Colony attracted immigrants to Arkansas until the middle of the 1880s, though the presence of the colony is still felt today.

Chancellor Otto von Bismarck of Prussian-dominated Germany expelled Strub and other Holy Ghost Fathers in 1873 by means of his anti-Catholic policy, Kulturkampf. The Holy Ghost Fathers fled Germany and crossed the Atlantic Ocean to Pennsylvania. In Pennsylvania, Strub learned of railroads offering land in Arkansas for settlement. Strub also learned of the Bishop Edward Fitzgerald’s desire for more Roman Catholic clergy in Arkansas.

After two trips to Arkansas, Strub wrote Bishop Fitzgerald of Little Rock (Pulaski County) and, in 1878, obtained permission to found St. Joseph Colony with Conway (Faulkner County) as its headquarters. The Little Rock and Fort Smith Railroad then granted the colony several hundred thousand acres of land from Marche (Pulaski County) to Atkins (Pope County). In January 1879, Strub moved the headquarters to Morrilton (Conway County) because of Morrilton’s more central location to the land grant. To fund the Holy Ghost Fathers’ headquarters, Strub entered into a land deal with the Little Rock and Fort Smith Railroad.

Attracting immigrants as settlers was an inherent part of the land deal that would pay for the Holy Ghost Fathers’ headquarters. The railroad granted the Holy Ghost Fathers the right to promote 200,000 acres with a commission of twenty cents for each acre sold to Catholic settlers. In 1880, Strub wrote The Leitstern, or The Guiding Star for the St. Joseph Colony, a German-language pamphlet published in St. Louis, Missouri, that encouraged immigrants to settle in the colony. Immigration propaganda was targeted toward German, Swiss, and Austrian Catholics, not only because of their reputation as hard workers, but also because of the common German language of previous settlers. By 1889, ninety-five Catholic families were around Morrilton, ninety around St. Vincent (Conway County) and Atkins (Pope County), and about 100 families around Conway.

The Holy Ghost Fathers, totaling fifteen in all in 1880, remained key leaders in the development of St. Joseph Colony. They provided Catholic settlers with credit and land at a reduced price. The Holy Ghost Fathers often cleared this land and experimented with the cultivation of new, potentially successful crops, such as grapes and various grains. To avoid the excessive fees charged by commercial operators, the Fathers ran steam-driven sawmills, cotton gins, and corn mills for the colony. The community churches and schools of the order not only preserved the German Catholic culture and religion but also encouraged the settlers to remain in the state.

Drought and disease in Arkansas during the mid-1880s nearly stopped Germans from immigrating to the state, though the Holy Ghost Fathers’ colony persisted. The Holy Ghost Fathers’ novitiate in Morrilton moved to Pittsburgh, Pennsylvania, in 1884, and the surviving school and church were destroyed by a tornado in 1892. The Fathers’ parishioners were accepted into the Sacred Heart Church in Morrilton. In 1930, a new church building was constructed in St. Vincent to replace its first church, Our Mother of Perpetual Help, which was constructed under the guidance of Strub in 1881. This construction was partially supervised by descendents of the original church community. The first Catholic church in Atkins, St. Fidelis, was erected in 1879 and served the German colony. St. Fidelis became a school after the Church of the Assumption was built in 1898. The Church of the Assumption continues to offer services in Atkins. The Holy Ghost Fathers society began serving the St. Joseph Parish in Conway in 1878 and continued to serve the parish until 2010, when the parish was transferred to diocesan administration.

Conway County Historical Society. Conway County: Our Land, Our Home, Our People. Little Rock: Historical Publications of Arkansas, 1992. Magie, Erika. “Recruitment of Catholic Immigrants to St. Joseph Parish in Conway after the Formation of the Church in 1878.” Faulkner Facts and Fiddlings 43 (Spring/Summer 2001): 17–27.

ask our community of genealogists a question.
Sponsored Search by Ancestry.com
DNA
No known carriers of Clementine's DNA have taken a DNA test. 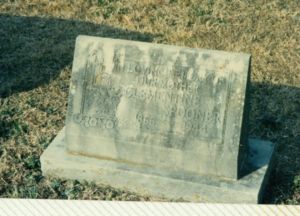 Mrs. Sponer was born in Conton of Wallis, Switzerland on the 12th of February 1866. She came from there with her parents, Mr. and Mrs. John Schmitter at the age of 14 and resided in St. Vincent ever since.

Kelly (O'Neill) Gottsponer
She was a mother of 11 children.