Wilhelm Welf was a member of the aristocracy in Europe.

Wilhelm (1535–1592), called the Younger (German: Wilhelm der Jüngere) was the fourth son of Ernst I, Duke of Brunswick und Luneburg in Luneburg of the house of Welf, and his wife, Sophie von Mecklenburg, and was born 4 July 1535.[1]

He was Duke of Brunswick-Lüneburg and Prince of Lüneburg from 1559 until his death. Until 1569 he ruled together with his brother, Henry of Dannenberg.[2]

On 12 October 1561 he married Dorothea of Denmark (29 June 1546 Kolding–6 January 1617 Winsen), daughter of Christian III King of Denmark and his wife, Dorothea of Sachsen-Lauenburg.

In 1582, William began suffering from fits of insanity. These fits caused his wife to flee him in 1584 for her own safety.

After his death, his wife became regent for their son George.

William the Younger was a member of the House of Welf.[3] The Brunswick-Lüneburg name is probably more aptly referred to as a landed title.

Is Wilhelm your ancestor? Please don't go away!

ask our community of genealogists a question.
Sponsored Search by Ancestry.com
DNA Connections
It may be possible to confirm family relationships with Wilhelm by comparing test results with other carriers of his Y-chromosome or his mother's mitochondrial DNA. However, there are no known yDNA test-takers in his direct paternal line. Mitochondrial DNA test-takers in the direct maternal line: 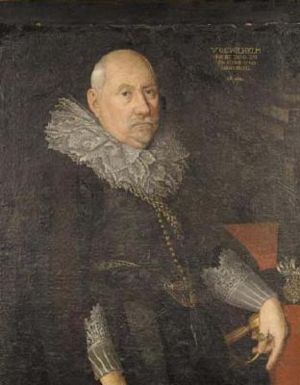