Henry Wells was a co-founder of the American companies, American Express and Wells Fargo & Company, as well as a philanthropist and a benefactor of Wells College.[1]

Henry Williams Dwight Wells was born on 12 December 1805 in Thetford, Orange County, Vermont, the son of Dorothea "Dorothy" (Randall) and Shipley Wells. His father was a Presbyterian minister at what is now the First Presbyterian Church of Seneca Falls, New York, who moved his family to central New York State in the westward migration of Yankees out of New England.[2][1][3][4]

Henry was a member of the seventh generation of his family in America. His original ancestor was an English immigrant Thomas Welles, who arrived in Massachusetts in 1635 and was the only man in Connecticut's history to hold all four top offices: governor, deputy governor, treasurer, and secretary.

As a child, Henry worked on the family farm and attended school in Fayette. In 1822, he was apprenticed to Jessup & Palmer, tanners and shoemakers at Palmyra, New York.

Henry was a significant participant of the California Gold Rush. His experience with the Pennsylvania Railroad gave him tremendous talent with express transportation. In 1841, with George Pomeroy, he co-founded Livingston, Wells, & Pomeroy, which provided customers with express service between Albany and Buffalo. He was arrested several times for delivering mail for six cents, a pittance compared to the then government rate of twenty-five.[1][10]

In 1844, Henry co-founded Wells & Company, which connected Buffalo to Cleveland and Detroit, making it the "first company to offer express service west of Buffalo". By 1850, Wells & Company had extended to Chicago and St. Louis, making it the first express company to provide service to these cities, as well. Henry soon engineered a merger, combining Wells & Company and Livingston & Wells (Pomeroy had since retired) with a third company that provided express service between Albany and New York City: American Express Company, with Henry as President. By offering a direct connection between New York City and most of the west, and by establishing European Express offices in London, England and Paris, France, the American Express Company quickly became the nation's major delivery company.[1][10]

The California Gold Rush created an urgent need for secure shipments of gold dust and bullions to the East. Henry co-founded Wells Fargo & Company with William Fargo to transport gold through steamship from San Francisco to New York City. Wells Fargo also provided stagecoach services and banking to a number of California mining communities. In 1855, the company began to offer express service through coach from St. Louis westward, eventually establishing a stage line all the way to California. By 1866, Wells Fargo had a near monopoly on the market.[1][10]

"In eighteen hundred and sixty, Wells College opened its gate." Wells was founded as Wells Seminary, by Henry Wells on 171 acres he purchashed in 1850 in Aurora, NY. On opening day, 16 Sep, his son Charles presented a statue of Minerva, Roman Goddess of wisdom, intellect, music and craft to the Seminary. It was the only thing to survive a 1988 fire that destroyed the original Main Hall. Seniors have for many years kissed Minerva's big toe for good luck on their way to Comprehensive Exams! Renamed Wells College in 1870, Wells was a women's college until 2005. Many Wells alumnae notably opposed the move to coeducation. Wells remains a small, private liberal arts college, well ranked nationally, with individual program options, and charming traditions. Henry Wells own home, Glen Park, is among the historic campus buildings.

Henry died in Glasgow, Scotland, on December 10, 1878, two days short of his 73rd birthday. He was brought home for burial, transported aboard the steam-ship Ethiopia. His funeral was held at his home in Aurora and he was buried at Oak Glen Cemetery in Aurora.[1][11][12]

I think that there is a family connection between Henry and Fred H. Wells Jr.. Fred started a milk route in 1913 in Le Mars, Iowa. That led to what is today known as Wells Enterprises (Wells Blue Bunny), the largest family-owned ice cream manufacturer in the United States. https://en.wikipedia.org/wiki/Wells_Enterprises 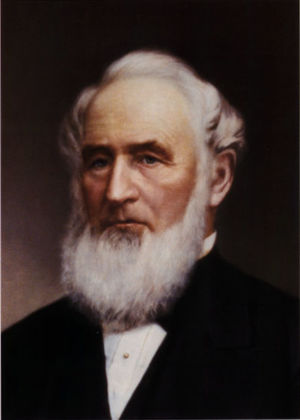 1879 Well Fargo Stagecoach on exhibit in the Wells Fargo Museum of Phoenix, Az 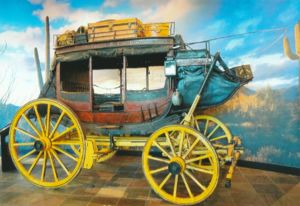 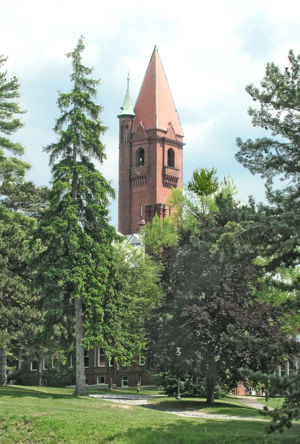 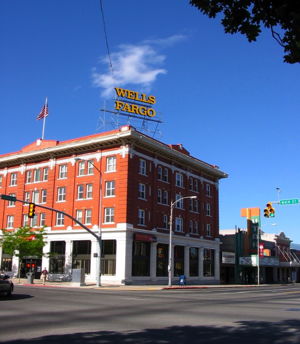 Abby (Brown) Glann
Hi there profile managers! We plan on featuring Henry as the Example Profile of the Week in the Connection finder on March 18th. Between now and then is a good time to take a look at the sources and biography to see if there are updates and improvements that need made, especially those that will bring it up to WikiTree Style Guide standards. I will check on the profile closer to the week we'll feature it and make changes as necessary.