His most notable science fiction works include The War of the Worlds, The Time Machine, The Invisible Man, and The Island of Doctor Moreau.

Herbert George Wells was born at Atlas House, 46 High Street, Bromley, in Kent,[8] on 21 September 1866. Called “Bertie” in the family, he was the fourth and last child of Joseph Wells (a former domestic gardener, and at the time a shopkeeper and professional cricketer) and his wife, Sarah Neal (a former domestic servant).

Wells died of unspecified causes on 13 August 1946 at his home at 13 Hanover Terrace, Regent's Park, London, aged 79. He was cremated at Golders Green Crematorium on 16 August 1946, his ashes scattered at sea near Old Harry Rocks. A commemorative blue plaque in his honor was installed at his home in Regent's Park.

Is H G your ancestor? Please don't go away!

ask our community of genealogists a question.
Sponsored Search by Ancestry.com
DNA
No known carriers of H G's DNA have taken a DNA test. 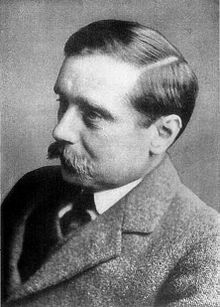 H G is 28 degrees from Donald Howard, 17 degrees from Julia Howe and 20 degrees from Henry VIII of England on our single family tree. Login to find your connection.