After finishing school in Switzerland, she married Paul Clifford Seyler MC, son of the playwright Clifford Seyler, in May 1942. She joined the WRNS shortly afterwards, serving as a clerk and then as a driver. She worked in an SPCK bookshop after the war, and had a son (Nicholas Laurie Seyler, later Nicholas Werner Laurie, now Nick Laurie), in 1946. Her husband left Britain soon after their son was born, and disappeared.

Joan was a journalist and reviewer (books and magazines seem to have been in the Laurie genes) and the first editor of the influential women’s periodical She (1955 onwards). She met journalist and broadcaster Nancy Spain in 1950 and they became life partners. She and Nancy Brooker Spain (13 September 1917 – 21 March 1964) were the nearest the 1950s got to an “out” Lesbian couple. Nancy Spain was one of the best-known personalities in the post-war media, known to millions as a TV panellist (What’s My Line, Juke Box Jury etc.) and her weekly column in the Daily Express. She also wrote a series of detective novels with a strong gay subtext, for those in the know (see Nancy Spain ). Nancy and Joan’s story is told with much relish in Rose Collis’ charming biography “A Trouser Wearing Character – The Life and Times of Nancy Spain.”

Joan died, with Spain and three others, on 21 March 1964. They were flying in a Piper Apache aeroplane which crashed near Aintree racecourse, near Liverpool, killing all on board. The aircraft (G-ASHC) had taken off from Luton Airport and was on approach to land at the racecourse. Spain was travelling there to cover the 1964 Grand National, which was taking place that day.

She was cremated with Spain at Golders Green Crematorium, London, and her ashes were put in the family grave in Horsley, Northumberland.

Is Jonny your ancestor? Please don't go away!

ask our community of genealogists a question.
Sponsored Search by Ancestry.com
DNA
No known carriers of Jonny's ancestors' DNA have taken a DNA test. 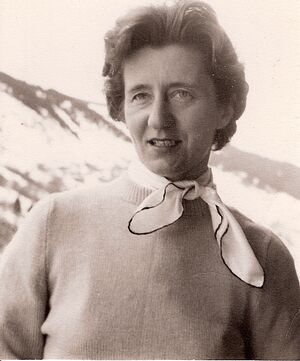