Egbert Wessex is a member of the House of Wessex.

Ecgberht [Egbert] (d. 839), king of the West Saxons, became king in 802 and ruled Wessex for thirty-seven years and seven months. During the latter part of his reign he extended the territory under his authority to include Kent, Surrey, Essex, and Sussex...[1]

Ecgberht was the son of Ealhmund, the Under-king of Kent. [2]

The Anglo-Saxon Chronicle records that "Egbert succeeded to the kingdom of Wessex" after the death of Beorhtric in 802, in a later passage describing him as Ecgberht as son of Ealhmund, and in another passage which setting out his complete ancestry from his son Æthelwulf King of Wessex. [2]

According to the Chronicle, Ecgberht was expelled from England in 789 by King Beorhtric after he unsuccessfully challenged Beorhtric's succession. It may be significant that "England" rather than "Wessex" is specified in this passage of the Chronicle. Ecgberht's father was king of Kent around this time, and it is possible that the expulsion was from Kent, maybe a consequence of his father being deposed as Kentish king. According to William of Malmesbury, Beorhtric was allied with Offa King of Mercia at this time. He explains that Ecgberht had sought refuge with King Offa after his expulsion by King Beorhtric, but that the latter bribed Offa for Ecgberht's surrender and was offered Offa's daughter in marriage in return. Ecgberht sought refuge at the Frankish court until [792]. [2]

During the late 8th century, when King Offa of Mercia (reigned 757-96) ruled most of England, Egbert lived in exile at the court of Charlemagne. Egbert regained his kingdom in 802. [citation needed]

In 789-792 he married Redburga. Her parents and the primary source which confirms her marriage has not yet been identified. According to Weir, she is said to have been "sister of the king of the Franks", who at the time was Charles I, later Emperor "Charlemagne", but her identity is uncertain. The primary source on which this is based has not been identified. If her origin was Frankish, King Ecgberht presumably married her during his exile at the Frankish court between [789/792]. [2]

On Beorhtric's death, he established himself in 802 as Ecgberht King of Wessex, rebelling against Mercian overlordship. [2]

"Meccia finally came under Egbert, their last king and the first king of all England, who reigned from 800-837.

The reign of King Ecgberht (802-39): Ecgberht had spent three years in exile in Frankia (789-92), and succeeded Beorhtric in 802. For charters in the name of King Ecgberht, see Edwards (E111). In 825 Ecgberht defeated Beornwulf, king of the Mercians, at the battle of Ellendun (Wroughton, Wiltshire), precipitating major political upheavals in the east and south-east. For Ecgberht and Kent, see Keynes (F6), pp. 121-4.

In 829 Ecgberht 'conquered the kingdom of the Mercians, and everything south of the Humber; and he was the eighth king who was "Brytenwealda" (ASC); later on in the same year, Egbert 'led an army to Dore [north Derbyshire], against the Northumbrians, and they offered him submission and peace there' (ASC). On the significance of the term 'Bretwalda', see Wormald (D180), Keynes (D181), Dumville (D183b), etc.

ASC 830: 'And that same year King Ecgberht led an army among the Welsh, and he reduced them all to humble submission to him.' It is not likely to be a coincidence that the Historia Brittonum (B11, C30) originated in Wales at precisely this time, in 829/830:

"Egbert is son of King Ealhmund of Wessex who descends from Cerdic, King of the West Saxons (reigned 519-34) - see AEM Charts. Cerdic led the Saxon conquest of Britain from the Briton tribes. Egbert is known as the first king of all England. He succeeded to the throne in 802 and "overthrew the Mercian king Beornwulf in 825. This led to the annexation by Wessex of Sussex, Surrey, Kent and Essex and the temporary recognition of West Saxon supremacy by Mercia." {-Encycl.Brit.,`56,23:520} His wife, Raedburh, is said to be a sister of the King of Franks. Egbert's later years saw many Danish Viking raids on England. {Ref. Harold W. Smith, "Saxon England," gens. 9-13. Also: "The Earliest English Kings," D. P. Kirby (London: Routledge, 1992), pp. 189-95.}"

The Anglo-Saxon Chronicle records that he ravaged the Britons of Dumnonia (Cornwall) 815]. [2]

He defeated Beornwulf King of Mercia in 825 at Ellendun [=Wroughton, Wiltshire], which marked the end of Mercian ascendancy. King Ecgberht immediately sent his son Æthelwulf with a large army into Kent, which submitted to him along with Surrey, Sussex and Essex. East Anglia, in revolt against Mercia, turned to Ecgberht for protection. The Anglo-Saxon Chronicle records that Ecgberht conquered Mercia in 829, taking the title rex Merciorum, from evidence provided by a limited number of coins, but lost control of Mercia again in 830. He exacted tribute from Eanred King of Northumbria in 829. [2]

In 829, the Northumbrians accepted his overlordship and he was proclaimed "Bretwalda" or sole ruler of Britain.[4][5]

He conquered the neighboring kingdoms of Kent, Cornwall, and Mercia, and by 830 he was the acknowledged sovereign of East Anglia, Sussex, Surrey, and Northumbria; and was titled Bretwalda (Anglo-Saxon, "ruler of the British").

835 Conflict with Danes and Vikings

During succeeding years Egbert led expeditions against the Welsh and the Vikings. The year before his death he defeated a combined force of Danes and Welsh at Hingston Down in Cornwall

The Anglo-Saxon Chronicle records that the first Danish raiders landed at Sheppey in 835 and King Ecgberht was defeated by Viking invaders at Carhampton in 836[1475], but defeated the Vikings at Hingston Down, Cornwall in 838[1476], which is probably when Cornwall was integrated into Wessex. "Ægberhtus rex occidentalium Saxonum" granted land at Canterbury to "Ciaba clericus", jointly with "Æthelwulfi regis filii mei", by charter dated 836[1477]. "Æthelwulf rex Cancie" was co-grantor of land in Kent with "Egberthus rex occident Saxonum pater meus" by charters dated [833/39] and 838 respectively. Despite his successes, he does not seem to have claimed overlordship over all the southern English or referred to himself as king of England. He is listed as eighth bretwalda in the Anglo-Saxon Chronicle[1479], supplementing the original list given by Bede. [2]

Ecgberht died February (or June) 839 and was buried at Winchester Cathedral. [2]

He was originally buried at Old Minster, Winchester, bones now at Winchester Cathedral. [6]

Sponsored Search by Ancestry.com
DNA
No known carriers of Egbert's DNA have taken a DNA test. 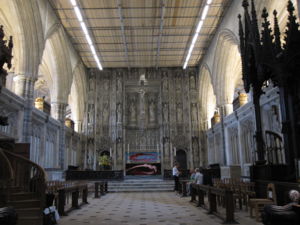 Can I remove one or perhaps there is a source for the third child?

1. ÆTHELWULF ([795/810]-13 Jan 858, bur Winchester). The Anglo-Saxon Chronicle names Æthelwulf as son of Ecgberht[1481]. He succeeded his father 839 as ÆTHELWULF King of Wessex. - see below. 2. EADGYTH (-Polesworth Abbey ----, bur Polesworth Abbey). A manuscript of Polesworth Monastery records that sancta Editha sorore regis Athulphi was a nun at the abbey[1482]. Another manuscript which narrates the foundation of Polesworth Monastery in more detail, but is stated in Dugdale´s Monasticon to date from 1640, records that Egbrycht the king had on sonArnulfe and a dowhturEdith, and that the latter was made abbess[1483].

Maggie N.
This profile should be open according to the WikiTree Honor code.

Egbert is 37 degrees from Mary McCauley, 39 degrees from B. W. J. Molier and 21 degrees from Henry VIII of England on our single family tree. Login to find your connection.