Alfred (Wessex) of Wessex is a member of the House of Wessex.

Asser, who knew him, states in his biography of Alfred that he was born in 849 at Wantage.[1] He was the son of Æthelwulf and Osburh.[2][1]

Asser records two journeys of Alfred and his father to Rome, one in 853 and the other in 855, stating that on the second occasion they remained there for a year.[1] The Canterbury manuscript of the Anglo-Saxon Chronicles has a rather unlikely statement that, during the 855-6 visit, the Pope "blessed Alfred as king":[3] Alfred had three older brothers at the time.

In his section on Alfred's upbringing, Asser describes how he was not taught to read until he was 12, but subsequently developed a love of books and learning.[4]

During Alfred's teenage years, England came under sustained Viking attack. The first record in the Anglo-Saxon Chronicles of Alfred taking a lead role in fighting is for 867 or 868, when Mercia appealed for help to him and his brother Æthelred. In January 871 Alfred and Æthelred defeated the Vikings in the Battle of Ashdown.[5]

In 868 Alfred married Ealhswith, daughter of a Mercian ealdorman, Æthelred Mucel.[2][6] They had five children whose names are known (the order is as given in Asser's Life):

Asser mentions that there were other children who died in childhood[7] but does not name them. Cawley states that Asser names one of these as Eadmund[8] but no names for children who died young are given in the translation of Asser by Albert S Cook,[7] nor in the translation in the book compiled by Simon Keynes and Michael Lapidge,[9] nor in the extracts from Asser (which include the relevant section) in Dorothy Whitelock's compilation of early English historical documents.[10] Alison Weir in Britain's Royal Families also states that Asser mentions a son called Eadmund.[11] The suggestion that Asser named Eadmund as a son appears to be a mistake.

The Book of Hyde mentions a daughter Elfreda as the second of four daughters.[8] She is not named by Asser, and this too may well be a mistake.

Alfred had three older brothers who ruled Wessex before him.[2] In 868 Alfred was named as heir apparent to his brother Æthelred.[6] In the second half of April 871 Æthelred died, leaving young children; with the kingdom under grave threat, Alfred was confirmed as his successor, but had to confirm the property rights of his nephews.[2][12]

Conflict with the Danes

In May 871 the Danish army, now increased in size by forces under Guthrum, and having overrun much of Mercia, defeated Alfred at Wilton. Further raids followed, and both Wessex and Mercia sought to come to terms with the enemy.[5] It is possible that, as part of the terms, the first payment of money in exchange for a period of peace - "danegeld" - was made.[2]

The respite for Wessex lasted some five years, during which the Danes focused on Mercia and areas further north.[5] In 876 Guthrum launched a fresh series of attacks. Over the next two years the Danes occupied most of Wessex, and on Twelfth Night in January 878 they came close to capturing Alfred himself at Chippenham in Wiltshire. Alfred was driven to seek safety at Athelney in the wetlands of Somerset. Fairly quickly he managed to assemble enough men to launch a surprise attack on Guthrum in May 878 and defeat him in the Battle of Edington. Guthrum, besieged afterwards, sought peace, and was baptised with Alfred acting as his sponsor.[2][13] The immediate menace was now averted. By 886 Alfred was able to take control of London.[13]

Alfred used the interval of relative peace after the Battle of Edington to strengthen the military position of Wessex. He divided the "fyrd" - the equivalent of a militia - into two, with one half being available for fighting at any one time. He substantially strengthened his naval forces. And, probably most important, he established a series of "burhs" - fortified settlements.[2][13]

In 892 another Viking army started to attack Wessex, but, while it inflicted some damage, forces of Wessex, Mercia and Wales managed to contain the threat and Wessex was largely safeguarded.[2][13]

Probably late in his reign, Alfred issued a set of laws. To a large extent they built on the laws of previous Anglo-Saxon monarchs of southern England, including Ine, whose own code of law was attached to Alfred's. The first provision refers to oaths and pledges given by individuals, and later codes of law were to build on this.[2][14][15]

Alfred sought to improve education for the ruling classes. He established a school at his court, following the example of Charlemagne. Teaching started in Old English before progressing to Latin.[2] He himself has his name attached to translations into Old English of several works, including the Regula Pastoralis - Pastoral Care - of Pope Gregory the Great and the Consolation of Philosophy of Boethius, and they were probably largely or wholly his own work. He attracted learned people from mainland Europe to help in his educational efforts.[2] It was during Alfred's reign that the Anglo-Saxon Chronicles started to be compiled.[2]

Alfred gave the Church substantial financial support. Asser describes how he systematically allocated a large part of his income to religious institutions,[16] though this may have been a rather idealised version of what happened in practice.[2] He founded Shaftesbury Abbey, which became closely associated with the royal house of Wessex, with his daughter Æthelgifu as abbess.[2]

Anglo-Saxon craftsmanship was fostered during his reign. A notable example is the Alfred Jewel, which bears the inscription "Ælfred mec heht gewyrcan" - "Alfred had me made".[2] (To see an image of the jewel, click on "View All" underneath the images on the right.)

Death, Burial and Will

Alfred died on 26 October 899.[2] He was buried initially at the Old Minster, Winchester. His remains, along with those of his wife Ealhswith, were moved to the New Minster, Winchester, by his son Edward the Elder.[17] In 1110 the monks of New Minster resettled at Hyde Abbey, and the remains were reinterred in front of the high altar there.[18] Crohn's disease may have been at least partly responsible for Alfred's death.[19]

Alfred's will survives. In it he made bequests to:[20]

Sponsored Search by Ancestry.com
DNA
No known carriers of Alfred's DNA have taken a DNA test. 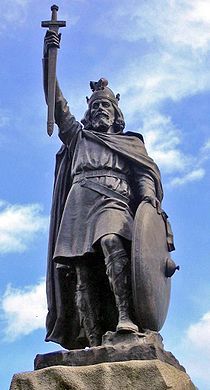 Coin of Alfred the Great 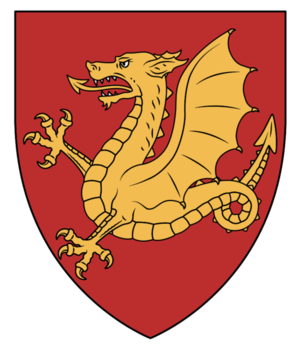 Michael Cayley
I plan soon to do some work on this profie on behalf of the Medieval Project.
posted Apr 12, 2021 by Michael Cayley

Michael Cayley
I have replaced a copyrighted image of the Alfred Jewel with one out of copyright.
posted Apr 19, 2021 by Michael Cayley

Michael Cayley
I have now finished the main work I currently intend on this profile. If anyone spots any typos etc, please either correct them or message me. Thanks!
posted Apr 20, 2021 by Michael Cayley