Christine Wettin was a member of the aristocracy in Europe.

Christine or Christina of Saxony, was born 25 December 1505,[1] probably at Dresden,[2]; the third, but eldest surviving daughter of Georg 'der Bärtige' (the Bearded), Herzog von Sachsen (Duke of Saxony), and his wife, Barbara, Princess of Poland.[1]

They were to have ten children:[3]

Although there were 10 children, the marriage wasn't considered happy, Philip had "no pleasure in her society"[4] and perhaps Christine had little pleasure in his.

Like many noblemen of the period, Philip had a number of other sexual partners but his conscience troubled him, though not enough to remain faithful to Christine. As early as 1526 he had made enquiries about how bigamy was viewed from a Protestant perspective[4] but it wasn't until 1539/40 that he pressed the issue in order to marry Margarethe von der Saale. Christine apparently gave her written consent to this second marriage[4] and they were married at Rotenburg an der Fulda on 4 March 1540.[2] As a part of the conditions of her approval, Margarethe was never to appear at court, and any sons from this marriage were not to be given any rights to inherit the Hessian lands.

In 1547, Philip was arrested and during this time Christine and her eldest son, Wilhelm (later Wilhelm IV) administered Hesse. She was never to see her husband again as she died between 10 and 11 o'clock in the evening[2] of 15 April 1549 at Kassel and was buried there in St Martinskirche [1]; [2]

A monument by the Hessian sculptor, Philipp Soldan was originally erected on the North side of the Choir in 1550, but after the death of her husband in 1567, a more magnificent tomb was built commemorating both of them. Originally planned and begun by the court sculptor the Dutch, Elias Godefroy, it was finished in 1572 by his pupil Adam Liquir Beaumont.[5]

During World War II it was "walled up to protect it from damage" and it was only partially damaged when the church was destroyed on 22 October 1943.[6] There had been a number of preservation attemps before World War II, but the latest in 2004 was partly to repair any damage caused from that time.[6]

Is Christine your ancestor? Please don't go away!

ask our community of genealogists a question.
Sponsored Search by Ancestry.com
DNA Connections
It may be possible to confirm family relationships with Christine by comparing test results with other carriers of her mitochondrial DNA. Mitochondrial DNA test-takers in the direct maternal line: 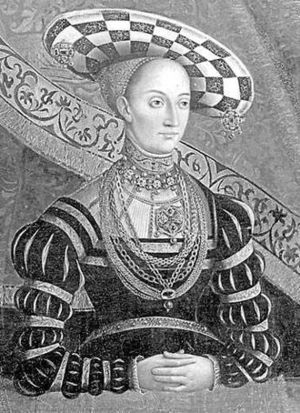 Leave a message for others who see this profile.
There are no comments yet.
Login to post a comment.
Michael Gutschmidt
Wettin-102 and Of Saxony-174 appear to represent the same person because: Data and biography match
posted Jan 09, 2017 by Michael Gutschmidt