Morinda[1] May Wheaton as born on July 19, 1874, in Midgic (Westmorland County) New Brunwsick.[2] She was the eldest child of Gilbert Wheaton and Rosaline Allen. Morinda lived on the farm with her parents and siblings until her marriage.

On December 23, 1891,[3] Morinda married Arthur Albert Hicks, a farmer from Upper Sackville. They lived their entire lives on the farm, where they raised 8 children. Their home was always a welcome place for their grandchildren to visit.[4]

Is Morinda your ancestor? Please don't go away!

ask our community of genealogists a question.
Sponsored Search by Ancestry.com
DNA Connections
It may be possible to confirm family relationships with Morinda by comparing test results with other carriers of her mitochondrial DNA. Mitochondrial DNA test-takers in the direct maternal line: It is likely that these autosomal DNA test-takers will share some percentage of DNA with Morinda: 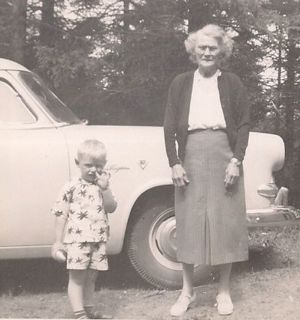