Elizabeth first married Thomas Durston/Duston, who died before 1 July 1662, when administration on his estate was granted to the widow.[3] Among other administrative actions as Thomas' widow, on 10 October 1662, Elizabeth sold to John Cutt "the houses & lands on Kittery side all that did belong to my husband deceased …"[4] As "Elizabeth Duston" she married again, Haverhill, 9 June 1663, to Matthias Button. [5]

There seems little doubt that the Elizabeth Duston who married Matthias Button in 1663 was the widow of Thomas. Albeit hearsay, two women, Luce Wills and Sarah Lidden, testified 25 June 1678 about statements made by Elizabeth, "ye Relict of Thomas Duston" regarding the Duston's indebtedness to "mr John Cutt, senr of piscattaq." The women further report that Elizabeth's "second husband by Name Button at his decease bequeathed to her selfe one hundred acres of land …"[6]

Her father's will, dated 28 March 1668, calls her Elizabeth Button; her children as just "Thomas," "Mary," and "Elizabeth." A transcription of the will by Mary Hammond follows; see also Essex Probate, John Wheeler.

Will Of John Wheeler
Be it knowne unto all men by theise psents, th(at I) John Wheeler of New(berie) in the county of Essex in New england Massachusets (Consider)ing my old age & (my owne) weakness: being in health of (body) and of pfect me(mory) through gods mercy (doe) hereby make my last will and testament, Comend(ing) my soule (in)to the hands of my blessed Redeemer Jesus Christe and my body to be buryed in the burying place of Newbury (when forver it shall please god to take me hence by death.) In Hope of a blessed Resurrection. And for my worldly goods I dispose as followeth first I give and bequeath unto my Son David Wheeler ten pounds of that debt which hee owes mee, 2dly I give to my Sonne Edward Wheeler of the Citty of Salisbury in the Realme of England ten pounds of which he is to pay three pounds and ten shillings to the Chamber of the Citty aforesaid also I give & bequeath to my Son (Adam Wheeler of the said Citty) forty shillings Al (so I give) to my Son (Thomas Wheeler forty) shillings And also I give to my Son William forty shillings in case he shall come over into this country. Also I give to my Daughter Mercy forty shillings, And to my Daughter Elizabeth Button I give four pounds, Also I give to my Daughter Anne Chase four pounds. I give to my Daughter in Law Susanne Wheeler four pounds, twenty shillings apeice to all theise my children, of this estate was given them by their mother which is included in the sev- erall Summs abou exprest (Also I) give and bequeath to my Son Georgs Children Ephraim Wheeler & (Samll) Wheeler four pounds apeice that is eight-pounds between them (when) they shalbe of the age of one and twenty to be paid by my Execut(or) I give to my Son Eoger Wheelers Daughter Mary Wheeler (three) pounds to be paid to her when she shall be of the age of (eighteen years) And to her Brother Joseph Wheeler I give forty shillings (when he shalbe) of the age of one & twenty years And to my Daughter El(izabeth chil)- dren forty shillings apeice: To Thomas forty shillings to be (e payd to) him when he shalbe of the age of one & twenty & To Mary (forty Shillings & to Elizabeth forty shillings when they shalbe Eight(een yeares) of age. All theise Legacycs are to be paid in Newengland (in such) pay as my Estate I leave wilbee due to my executor (in when) he shall receive it. And the Legacyes above mentioned which (is) to my children shalbe paid within one whole yeare after my decease but those of my Grandchildren to be to the use of my Executor untill they shalbee of the ages above mentioned, Also I give the Land to my Daughter in Law Susanne My Son Georgs wife which I gave to her husband which he built (upon) as it is inclosed: Also I appoint my Son Henry Wheeler to be sole Executor of this my Last Will & testament and to have all the rest of my goods & chattells undisposed of my debts & funerall being discharged. March 28, 1668. John Wheeler (Seal) Witnesse Anthony Someebt Augustinn Stickney Jr Roger Woodman Beniamine Lowle Jonathan Woodman Benj: Loel & Jon(athan) Woodman gave their oath before Court held at Hampton Octo(br ye:) 11:1670. that this was the will & testament of John Wheeler, & (of when) he declared the same he was compos mentis; & that they know of no other will but this made by him & that he did signe & seale this writeing as his last will. as attests, Tho: Bradbury reed. The words & letters in square brackets taken from the records See Essex South District Begistry of Deeds. Norfolk Eecords Book 2 Part 2 folio 288. Essex ss. Probate Office July 23, 1913 A true Copy Attest: Ezra D. Hines, Asst Eegister.[2] Probated October 11 1670.[3]

Robert Charles Anderson, _Great Migration: Immigrants to New England, 1634-1635, Volume VII, T-Y_ (2011), 324, for entry "John Wheeler." About the man said to have migrated aboard the _Mary & John_ in 1634 from Southampton, Anderson writes, "No records for this passenger have been found in New England," thus updating earlier findings to the contrary as same may appear in "Savage 4:497; Pope 489-90; see also GDMNH 743 and Hoyt 353-54." Anderson cites Davis' _The Ancestry of Annis Spear ..._ (1945) for arguments about why the _Mary & John_ passenger would not have been the "John Wheeler of Salisbury and elsewhere." 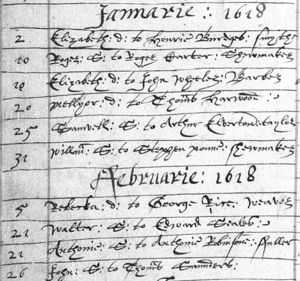 For more information about Elizabeth, please see the text and sources posted to Wheeler-613.

posted May 09, 2014 by GeneJ X
GeneJ X
Wheeler-3225 and Wheeler-613 appear to represent the same person because: Wheeler 3225 were both bap. the same day, same place. They both died the same day; same place. Both are daus. of John Wheeler.

posted May 09, 2014 by GeneJ X
GeneJ X
The marriage date as "9 June 1663" is misplaced. That is the date on which Elizabeth Duston married Haverhill, Massachusetts, to Matthias Button. %3Bseq55 _Vital Records of Haverhill ..._ 2:51

According to the source that follows, Elizabeth's first husband, Thomas Duston, deceased before 1 July 1662, the "date on which his wife being made administratrix of her husband's estate by Court at York." See Harold Dustin Kilgore and The Duston-Dustin Family Association Genealogists, _The Duston-Dustin family genealogy_ (1938-1988?), 11, "First Generation"; digital images, _FamilySearch_ (accessed 2014 via Family History Library Catalog).