Patrick White was an Australian writer who, from 1935 to 1987, published twelve novels, three short-story collections and eight plays. He remained, essentially, a private person. He was the first Australian to win a Nobel Prize for Literature and the inaugural recipient of the Miles Franklin Literary Award. He was among the first group of Companions of the Order of Australia (AC) in the Queen's Birthday Honours 1975 but resigned in June 1976. His grand home ‘Highbury’ at Centennial Park, Sydney is listed on the State Heritage Register.

Patrick Victor Martindale White was born in Knightsbridge, London, England to Victor White and Ruth Withycombe, both Australians, in their apartment overlooking Hyde Park, London on 28th May 1912. [1] His family returned to Sydney, Australia, when he was six months old.

From 1932 to 1935, White lived in England, studying French and German literature at King's College, Cambridge University. Later in the 1930s, he spent time in the United States, including Cape Cod, Massachusetts, and New York City. By the time the Second World War was declared, he had returned to London and joined the Royal Air Force. He was accepted as an intelligence officer, and was posted to the Middle East. He served in Egypt, Palestine, and Greece before the war was over. While in the Middle East, he met Greek army officer, Manoly Lascaris, who was to become his life partner.

White and Lascaris lived together in Cairo for six years before moving to a small farm, 'Dogwoods', purchased by White at Castle Hill, in Greater Sydney north western Hills district, in 1948. They lived there for eighteen years, selling flowers, vegetables, milk, and cream as well as pedigreed puppies. He wrote some of his seminal works including Voss, in this setting. Patrick Avenue, White Place and Nobel Place, Castle Hill are named after White in recognition of his life at Castle Hill. In 1966 they moved into a grand house, 'Highbury', in Centennial Park, where they lived for the rest of their lives.

White was the inaugural recipient of the Miles Franklin Literary Award in 1957. In 1970, he declined a knighthood. He accepted the Nobel Prize for Literature in 1973, however, enlisted Australian artist and friend, Sidney Nolan, to travel to Sweden to receive the award. White used the money from the prize to establish a trust to fund the Patrick White Award, given annually to established creative writers who have received little public recognition. White was made Australian of the Year for 1974. He declined both a $10,000 Britannia Award and another Miles Franklin Award. He was among the first group of Companions of the Order of Australia (AC) in the Queen's Birthday Honours 1975 but resigned in June 1976 in protest of the creation of Knight and Dame of the Order of Australia (AK and AD respectively).

He is commemorated by the Patrick White Lawns adjacent to the National Library of Australia in Canberra.

ask our community of genealogists a question.
Sponsored Search by Ancestry.com
DNA
No known carriers of Patrick's ancestors' DNA have taken a DNA test. 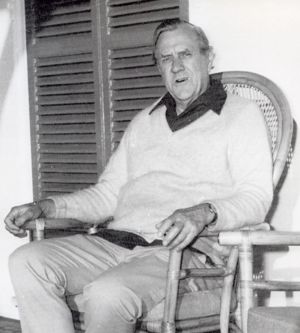