The English origins of the White family have recently been discovered and published. [1] [2] These articles correct many errors and theories which have been published regarding these Mayflower families. The family originated in Wisbech, Cambridgeshire, England, however, it is likely Resolved White never lived in England as his parents had moved to Leiden, Holland, in 1608.

A precise date of 9 September 1615 which can be found on the internet is unsupported by any record. Statements that his parents never lived in Leiden so they must have joined the Mayflower in London are incorrect.[6]

In the 1623 Plymouth division of land William White received five acres as a passenger on the Mayflower (even though he had been dead for two years).[9] In the 1627 Plymouth division of cattle Resolved White and Peregrine White were the tenth and eleventh persons in the third company.[10]

Resolved married, first, Judith Vassall, daughter of William Vassall, on 18 April 1640 in Scituate, Plymouth Colony.[11] This date is recorded in the Plymouth Colony Records. It should be noted that the Scituate Vital Records state they were married 5 November 1640.[12] The reason for the discrepancy between these two dates is not known. Judith (c. 1619-1670) was the daughter of William and Ann (King) Vassal. William's 1655 will specifically names daughter Judith White, wife of Resolved White.[6]

Judith's father, William Vassall, left New England in 1646, eventually settling in Barbadoes, where he acquired land and died in between 1655 and 1657. He divided his estate among his children. Two deeds indicate that Resolved and perhaps Judith, visited Barbados for the purpose of settling William's estate. 17 Mar 1656/7 Resolved White of Scituate in New Plymouth in New England, gentleman, and his wife Judith, daughter of William Vassall of this Island [Barbados], Esq. sold to Nicholas Ware of St. Michael's, merchant, their one fifth of two thirds of Vassal's plantation in St. Michael's. A couple of months later, 11 May 1657, Resolved witnessed the sale by Mary Vassal of Barbados to her brother-in-law, the same Nicholas Ware as above, her share of her father William Vassal's plantation.[6][16]

Resolved of Scituate, planter, sold land in Scituate to William Wills in 1662 and in 1663, Judith, his wife acknowledged the deed.[6] This included land he recieved by deed of gift from William Vassal in 1646.[18]

21 April 1669 Resolved White, husbandman, of Marshfield sold to Humphrey Johnson his rights in the Common in Scituate etc., in which he had formerly been a resident.[21]

He and Peregrine were refered to as brother in the will of Gov. Josiah Winslow 2 July 1675, who left him a suit of clothes and a cloak.[6][22] Resolved's mother married Josiah Winslow's father in 1621.

Resolved White died after 19 September 1687 presumably in Marshfield, Plymouth Colony. On that date his son William White quitclaimed his rights to land to John Branch, mentioning his father, but not as "deceased," and mentioning the earlier deed of "my father Mr. Resolved White." [25]

Noted Pilgrim researcher George Bowman stated that Resolved White died between 1690 and 1694. [26] While not impossible or even unlikely, the record evidence for these dates is not known. These dates of 1690 and 1694 are commonly found on the internet, but are not used here until the primary records are found to support them.

No death, burial or probate record was recorded for Resolved White.[6] This was not uncommon in the time. He perhaps had already given away all of his land and possessions to his children and had no need of a will.

Sponsored Search by Ancestry.com
DNA Connections
It may be possible to confirm family relationships with Resolved by comparing test results with other carriers of his Y-chromosome or his mother's mitochondrial DNA. Y-chromosome DNA test-takers in his direct paternal line on WikiTree:

Images: 3
Modern interpretation of the Mayflower 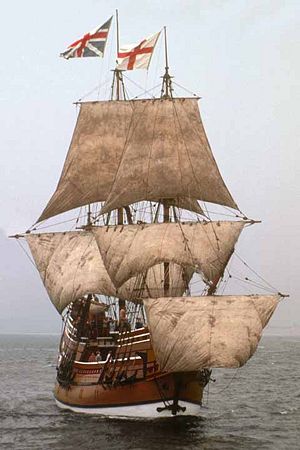 The Landing of the Pilgrims 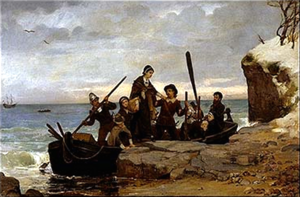 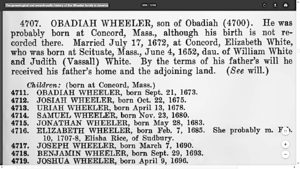 Leave a message for others who see this profile.
There are no comments yet.
Login to post a comment.
Alton Rogers
Many years ago I created a document titled Our Vassall Ancestry and added to it over the years. It is now 22 pages - detailing the lives of Resolved White and wife Judith Vassall and her Vassall ancestry, at least as much as research reveals.

I wrote the Wikipedia articles for ancestors William Vassall and Resolved White and much of the articles are in the Vassall ancestry.

The latest version of Our Vassall Ancestry was created in Feb. 2019 and a copy can be sent as an e-mail attachment to any interested person who contacts me.

Have also participated in updating the WikiTree records on the White family ancestry from the 3 TAG documents were published in April, July and October of 2017.

Christine (Raffo) Zakary
I would very much like an emailed copy of your Vassall Ancestry 'compendium'. Judith Vassall and Resolved White are my 8th g-grandparents. William Vassall is my 9th g-grandparent. I tried to find a way to contact you privately. I apologize for leaving this request on a public comment
posted Aug 17, 2020 by Christine (Raffo) Zakary
Joe Cochoit
These statements about being part of the London merchant group are incorrect. William White moved to Leiden in 1608 where he was an important part of of the separatist movement there in the Henry Ainsworth congregation.
posted Apr 08, 2018 by Joe Cochoit

Christine (Raffo) Zakary
The Whites are believed to have boarded the Mayflower as part of the London merchant group, and not necessarily with the members of the Leiden Holland religious movement - i.e. Pilgrims. (although many Merchant Venturers who financed the Pilgrims and Puritans also happened to be English Reformers and sympathetic to them). Evidence of the William White family boardig the Mayflower when it stopped in England and not Holland comes from William Bradfords Mayflower passenger list which has "Mr. William White" in his section for London merchant.

The White family, as recalled by William Bradford in 1651, per their Mayflower voyage, plus the birth of Peregrine: Mr. William White, and Susana, his wife, and one sone, called Resolved, and one borne a ship-bord, called Peregriene; and *2* servants, named William Holbeck and Edward Thomson.

Resolved Whites father William White died on February 21, 1621. With her husband's death, Susanna, with her newborn son Peregrine and five-year-old Resolved, became the only surviving widow out of the many families who perished that first winter. On May 12, 1621 Resolveds mother Susanna married widower Edward Winslow, a Mayflower and later a Plymouth colony notable with whom she had five children, one of whom was Josiah Winslow, future Plymouth governor.

Jenn Jackson
Big thank you to all the managers who worked on this. I'm stunned to find a direct ancestor on the Mayflower, and know I would not have been able to uncover this on my own. Many, many thanks to you and the managers who worked the Crapo line.
posted Sep 19, 2015 by Jenn Jackson
Lauren S
White-16542 and White-505 appear to represent the same person because: They appear to both be the Resolved White, born in Leiden, Netherlands & died in Massachusetts Colony.
posted Jan 09, 2015 by Lauren S