Alfred Whitehead was born on 1 March 1898 at 67 Ashley Street, St Martin's, Birmingham Warwickshire, England,[1][2] the son of William Henry Whitehead, an bicycle maker's clerk, and Mary Ann Hill.[1][3][4]. His mother, who was living at 67 Ashley Street at the time, registered Alfred's birth on 12 April 1898.[1] Ashley Street was part of Birmingham's Jewish community.[5]

Alfred married Eileen Whittaker at the Register Office in Fylde, Lancaster and Blackpool on 15 August 1921 with George Dascher and Lillian Gertrude Whitehead as witnesses and John Lump and Fred St Brown as the Registrar and Superintendent Registrar respectively.[4] Both Alfred and Eileen were listed as living at 33 Lune Grove, Blackpool at the time.[4] They had four children:

The family moved from England to South Africa in the 1930s when Alfred, a "confectioner journeyman," was sent to establish Cadbury's in the region.[6][7] All of Alfred's children were born in England with the exception of Edward who was born in South Africa.[8]

Alfred returned to England from South Africa in 1946.[9] Alfred would return to South Africa fairly soon afterwards, still suffering from the depression brought on by the accidental death of one of his sons' friends when the children were playing with Alfred's gun.[8] Alfred never really recovered from this depression.[8]

He had a planned destination of 100 Manor House Lane, Yardley, Birmingham, presumably to stay with his sister, Lillian, and her husband.[10]

Alfred died in Bulawayo Central Hospital, Bulawayo, Southern Rhodesia (now Zimbabwe) of terminal bronchopneumonia "consistent with peripheral neuritis following Tofranil overdosage."[2][11] His son initially registered his death on 9 March 1970 and it was re-registered on 21 May 1970 by the Magistrate EE Lacey.[2][11] Alfred was living at the Palace Hotel on Abercorn Street, Bulawayo at the time of his death.[2][11]

Research Question: When and where was Alfred Whitehead born and/or christened and who were his parents?

Research Question: Did Alfred Whitehead serve in World War I and, if so, in what regiment?

Hypothesis 1: AW served in the 12th Battallion of the Lancashire Fusiliers.

Research Question: Where and when did Alfred Whitehead die?

ask our community of genealogists a question.
Sponsored Search by Ancestry.com
DNA Connections
It may be possible to confirm family relationships with Alfred by comparing test results with other carriers of his Y-chromosome or his mother's mitochondrial DNA. However, there are no known yDNA or mtDNA test-takers in his direct paternal or maternal line. It is likely that these autosomal DNA test-takers will share some percentage of DNA with Alfred: 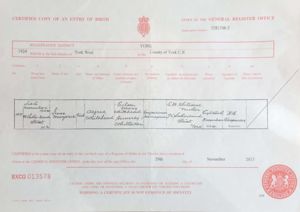 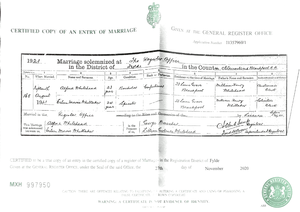 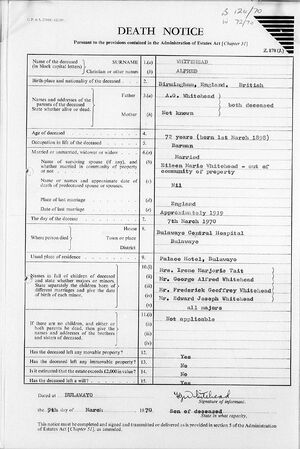 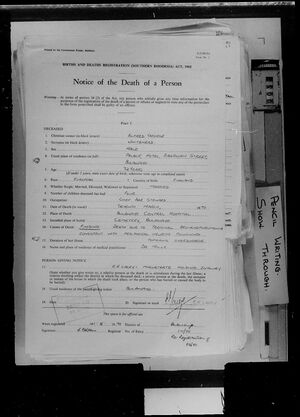 Entry of Birth for Alfred Whitehead