H. L. Whitlock, one of the early settlers of this community and one who has always been an active worker in those things which made for the building up of the community, died at his home here Saturday morning, Dec. 8, at 3:45 after only a week's illness. He was 68 years, 8 months old at the time of his death. Members of his immediate family excepting two daughters, Mrs. Ernest Happle of Devils Lake, N.D. and Mrs. Chris Ploeger of Kansas, were at his bedside at the time of his death.

Previous to his death Mr. Whitlock had been in excellent health during the fall, excepting for a slight cold, until Friday, November 30, when he became slightly ill, apparently suffering from a cold and took to his bed. Later his condition became more serious and Dr. W. L. Gordon who was called pronounced his trouble as heart disease.

On the Wednesday preceding his death he seemed considerably improved and sat up in bed but on the following day he suffered a relapse and his condition became steadily worse until the time of his death. During his short illness he suffered a great deal of pain but until 12 o'clock of the morning he was conscious and cheerful. Members of the family who were with him talked with him until at that time when he apparently fell into a light sleep. He did not regain consciousness and died at 3:45 that morning.

Funeral services were held from the city hall at 2:30 Monday afternoon with friends and neighbors from throughout the county attending. The funeral services were delivered by Rev. Leslie R. Burgum, former Methodist minister here, who had known the deceased since his early youth. He was assisted by Rev. Oscar Swenson, present Methodist minister here, and a local quartet consisting of Mrs. E. I. Schulz, Mrs. John Starbuck, John Bibelheimer and Gorden Burgum, sang as a part of the service.

Arrangements for the funeral were in charge of the Knight's of the Pythia Lodge here of which Mr. Whitlock was a member. Interment was made in Riverview Cemetery here. Pallbearers, friends of the deceased, were Ole H. Stefferud, Fred Pfister, Hans Nygaard, R. O. Everson, Fred Macomber and Millard Wilson.

H. Luther Whitlock in the 27 or more years that he lived in the community was a good citizen, a good neighbor, and a loyal friend. He was a member of the K. P. Lodge here and the Woodsmen Lodge in his younger days, was active in civic affairs. His death causes sincere sorrow in the hearts of hundreds of people in this community who knew him and were his friends. They offer the family their sincere sympathy in their bereavement.

Henry Luther Whitlock, the son of Mr. and Mrs. Erwin James Whitlock, was born in St. Joseph, Missouri. Shortly after his birth his family moved to Douglas, Ill. from where his father enlisted in the army for the Civil War. Following the war the family moved, this time going to Chicago where they stayed about three years, before making a trip across country via horse and wagon to Annandale, Minnesota where they homesteaded and there Mr. Whitlock spent the remainder of his youth living with his parents and there in 1879 was married to Miss Ida Day, and they moved to Motley, Minn. To this union were born 5 children, a son who died in infancy, three daughters Nellie, Iva, Myrtle, and a son Roy. Mrs. Whitlock died in 1892.

Following the death of his first wife, Mr. Whitlock went to Kennan, Wisconsin and in 1895 spent one year in North Dakota with his brother Jim who was living here at the time.

After a year he returned to Wisconsin and there he met Miss Alice Johnson whom he married. In 1901 they came to this county and settled on a homestead in Conkling community where they lived for two years before they moved to Washburn. Where Mr. Whitlock was engaged in the dray and transfer business for a number of years. Later he worked for the County at the County Courthouse here for ten years until 1919, when they bought the Cafe which they have been running since then.

Note: According to his death certificate and obituary, Luther was born in St. Joseph, Missouri. However, his father,Irvin Whitlock, reported in his Civil War pension application, that the family lived at LaGrange, Lewis County, Missouri, at the time of Luther's birth. Irvin reported each place where he resided but never mentioned St. Joseph. Other information in Henry Luther Whitlock's obituary is also misleading: his father, Ervin [not Irwin], was discharged from the Army at Fort Douglas, Illinois. He did not enlist there.

Is Luther your ancestor? Please don't go away!

ask our community of genealogists a question.
Sponsored Search by Ancestry.com
DNA Connections
It may be possible to confirm family relationships with Luther by comparing test results with other carriers of his Y-chromosome or his mother's mitochondrial DNA. However, there are no known yDNA or mtDNA test-takers in his direct paternal or maternal line. It is likely that these autosomal DNA test-takers will share some percentage of DNA with Luther: 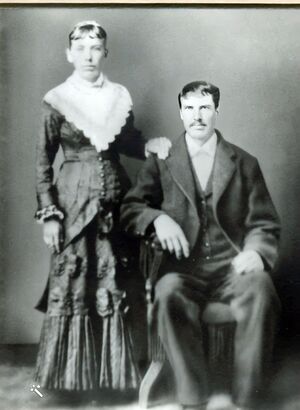