Edward was born in Unity, Maine, and lived most of his life in Lowell and in Fitchburg, Massachusetts. According to an obituary in the Fitchburg newspaper:

"Edward D. Whitten, sailor, carpenter, millwright, and lover of the sea, died late yesterday afternoon at Burbank Hospital after an illness of more than a year. He was 75 years old and made his home at 86 Nashua Street. ... Mr. Whitten was born in Unity, Me. When only eight years old he shipped aboard a three-master as a cabin boy. He sailed around the world, literally, in the next 10 years in that era, when the Yankee schooners were probing to the most distant points of the globe. When he attained his majority, however, he determined on a land career and learned the trade of carpenter. He worked in Lowell and Brookline before coming to Fitchburg in 1890 where he found work with the Boston & Maine carshops, then in their hey-day. Mr. Whitten often told of his early experiences in this city when horse-cars were the only regular transportation when Moran Square was only partially settled. When business became slack at the carshops he worked successively for the Rodney Wallace Paper Co. and the Parkhill Mfg. Co. He retired about five years ago. He was a member and regular attendant at Christ Church. ... Burial will be in Forest Hill cemetary in the family lot."

Edward married Mary Olive Lorman February 10, 1882 in Lowell, Massachusetts, at St. Anne's Episcopal Church. According to a newspaper account they were living at 79 Laurel Street in Lowell at the time of their silver wedding anniversary.

On his son, Edward Dillingham Whitten, Jr.s birth record he is listed as a Carpenter. His (Sr.'s) birth is recorded as "WoodStock.".[1]

In the early 1890s, Edward moved to Fitchburg, where his father Samuel was living and working as a watchmaker. Edward's brothers Frederick and Albion were living in Fitchburg with their father in the 1880s but had moved on by the time Edward arrived.

In the 1893 and 1896 Fitchburg city directories, Edward is working at the Fitchburg Railroad shop, and living at 11 Mack.

By the 1911 Fitchburg city directory, Edward is working at Fitchburg Paper Company, with his home at 97 Charles Street. His sons Edward Jr. and Maurice are with him.

In the 1919 directory, Edward is still at Fitchburg Paper Company. The home address is now listed as 193 Charles Street instead of 97 Charles Street.

At the time of the 1920 census the family is renting their home at 193 Charles Street. The household includes Edward and Mary, plus Emily, Maurice, and Evelyn. [2]

In the 1924 directory, his profession is listed as carpenter but without an employer. Perhaps he is retired.

At the time of the 1930 census, Edward and Mary are in the household of Maurice/Morris and his wife and children on Nashua Street. [3]

The Whitten family bible, which Edward gave to his wife shortly after their marriage, confirms the death of Edward as November 12, 1930. It says that he died, "at the hospital after a long illness, burial from Christ Church to Forest Hill Cemetery at family lot."

Edward hand-crafted a half dozen ship models. One was given to the Christ Church. They called it the "Christian Ship" and a hymn was written for it! A picture of the ship and the lyrics of the hymn were apparently hung in many parishoners' homes. This model has since been lost. Edward's great-grandson Ted Whittenkraus did a search for it as a young man but came up empty-handed.

One of the ships he carved is at the Fitchburg Historical Society.

Ted Whittenkraus has possession of another. This one stayed in the family and was kept in the attic of the family house built by Edward's grandson Edward B. Whitten on White Street in Lunenburg for many years. Generations of kids played with it as a toy (including Edward's great-grandsons Ed and Ted, Ted's children Ted and Chris, Ted's sister Holly's son Nick, Ted sister Steph's son Alex, etc.) until it was recognized as a family heirloom.

ask our community of genealogists a question.
Sponsored Search by Ancestry.com
DNA Connections
It may be possible to confirm family relationships with Edward by comparing test results with other carriers of his Y-chromosome or his mother's mitochondrial DNA. Y-chromosome DNA test-takers in his direct paternal line on WikiTree: It is likely that these autosomal DNA test-takers will share some percentage of DNA with Edward: 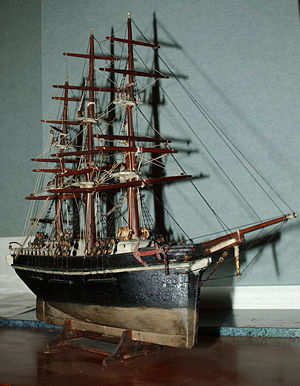 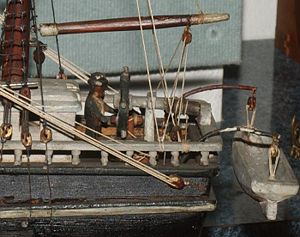