The Maine Register and Business Directory for 1856[4] includes Samuel M. R. Whitten under "Watches and Jewelry" in Unity.

The 1870 census lists him as living in Hampden, Penobscot, Maine at age 42, working as a watchmaker.

In the early 1880s he moved to Fitchburg, Massachusetts. The 1884 city directory lists Samuel M. R. Whitten as a jeweler at L.H. Pratt & Co. (their advertisement: "Watchmakers and Jewelers, 160 Main Street, Fitchburg, All work done on premises by first-class workmen. Engraving a specialty"). In this 1884 directory, his home is listed as being at "Summer and Cane". In this directory, the only other Whitten is Fred, presumably his son Frederick, working as a painter and boarding at the house on Summer and Cane.

The 1885 Fitchburg city directory has Samuel M. R. working as a watchmaker and jeweler at 8 Day Street with his house at 176 Summer Street. His son Albion H. is living with him and working as a carpenter. Fred has moved to West Boylston.

By 1890 Samuel has moved to 52 Oliver Street. Albion moved out and was living at 55 North Street, then moved to Lowell.

In 1893, the only family member with Samuel in Fitchburg is now his son Edward.

The 1900 census lists him as living in Malden Ward 3, Middlesex, Massachusetts, at age 70, working as a watchmaker. The name here is "Samuel R. Whitton".

Samuel's funeral was held in his late home on Main Street in North Leominster. The Rev. Albert L. Squier of the First Methodist Church did the service. Interment was at the Forest Hill Cemetery.[6][7]

We know his middle name is McRoy from his daughter Mary Ellen's marriage certificate and his son Albion's death certificate.[8] The latter also supports his birthplace as Freeport, Maine, and his wife as Lydia Mitchell of Sharon, Vermont. The former shows his profession as jeweller.

McRoy appears to be his great-grandmother's maiden name.

ask our community of genealogists a question.
Sponsored Search by Ancestry.com
DNA Connections
It may be possible to confirm family relationships with Samuel by comparing test results with other carriers of his Y-chromosome or his mother's mitochondrial DNA. Y-chromosome DNA test-takers in his direct paternal line on WikiTree: It is likely that these autosomal DNA test-takers will share some percentage of DNA with Samuel: 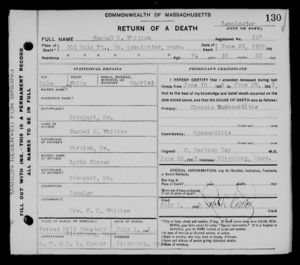 Chris Whitten
Whitten-1049 and Whitten-26 appear to represent the same person because: This is a duplicate profile. The only difference is the middle name. What is the source for Samuel's middle name being Mcroy? Thanks!
posted Apr 27, 2016 by Chris Whitten