Albion was born in Maine.[1] Presumably he was named for his uncle Albion Whitten.

In the 1870 census, 16-year-old Albion is living with his parents in Hampden, Penobscot, Maine, and working on a farm.

The 1870 census also has the 16-year-old Albion living and working on the farm of Newell Bagley in Troy, Waldo, Maine. (Double-counted that year!)

In the 1880 census, 27-year-old Albion is living as a boarder in the house of George Littlefield in Sanford, York, Maine, and working in a woolen mill.

In 1885, Albion H. appears in the city directory for Fitchburg, Massachusetts, living with his father at 176 Summer Street and working as a carpenter. There were no other family members listed. The next year he apparently moved out of the house into his own home at 55 North Street. Perhaps this is when he married Bella.

In the late 1890s Albion moved to Lowell.

In the 1910 census, 56-year-old Albion is working as the boss carpenter in a machine shop and living in Lawrence Ward 2, Essex, Massachusetts, with Bella and his stepdaughter Bertha Drew 34, and her two children Earl Drew, 15, and Chauncey Drew, 14. Presumably Bertha, born about 1876, was from a previous marriage of Bella's.

A death certificate e-mailed by Keith Whitten shows his death date as April 19, 1910. Cause of death: "Carbuncle of neck." It records his burial at Bellevue Cemetery in Lawrence. The informant was Clyde Whitten, perhaps his son?

Is Albion your ancestor? Please don't go away!

ask our community of genealogists a question.
Sponsored Search by Ancestry.com
DNA Connections
It may be possible to confirm family relationships with Albion by comparing test results with other carriers of his Y-chromosome or his mother's mitochondrial DNA. Y-chromosome DNA test-takers in his direct paternal line on WikiTree: It is likely that these autosomal DNA test-takers will share some percentage of DNA with Albion: 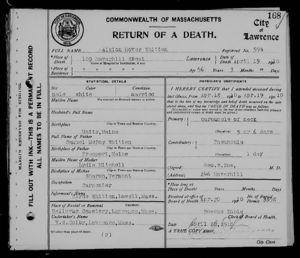