Eliezer Wiesel was born on September 30, 1928 in Sighet, Maramureș, Kingdom of Romania to his parents Shlomo Wiesel and Sarah (Feig) Weisel. He was a middle child, with two older sisters (Hilda and Beatrice) and one younger sister (Tzipora/Tsiporah).

He was given the Hebrew name Eliezer, for his paternal grandfather who had died in World War I. His birth certificate shows the name Lazare, and as a child he was known as Liczu and Leizer, before he adopted the short name of Elie. [1]

Sighet was one of many "shtetl" towns, or small Jewish towns within the borders of Romania, but was directly on the border with the Ukraine. The town was experiencing a period of peace during his initial childhood, as the end of WW I coupled with the the dissolution of the Austro-Hungarian Monarchy created independence and freedoms for the Romanian people. However, the peace was not to last.

In 1939, Romania was strong-armed by both Germany and the Soviet Union to join the Axis forces or face immediate invasion. Giving in to the pressure, Romania essentially surrendered their government, military, and national resources, and the situation grew dire for the Jewish people of Romania. By 1940 the Nazis had assumed control, and Sighet was given over to Hungary. In 1944, Elie (now age 15) and his entire family were placed into the Nazi ghettos on Serpent Street, the larger of the two ghettos in the town. And by May 6, 1944, the Nazis deported the entire community to Auschwitz.

Under deplorable working and living conditions, Elie managed to remain alongside his father in the camp until his father could no longer continue. His mother and sisters were immediately separated from him upon entry to the camp, and he would not hear of their fate until later. His father was sent to the crematorium only weeks before their camp was liberated by the US Army forces on April 11, 1945.

Elie was sent to a French orphanage, where he eventually reunited with his sisters Beatrice and Hilda. His mother and youngest sister Tsiporah both died in Auschwitz. Elie became a very learned man, knowing Yiddish and Romanian already and also learning French. Through his understanding of languages, he made a career writing in the newspaper industry. He tried to put the past behind him, but ten years after the war ended, he was encouraged by writer François Mauriac to write of his experiences.

He went to Washington DC in 1955 as a foreign correspondent and was struck by a taxi in 1956. To avoid red tape with his travel papers, he chose to accept US Citizenship. Around 1956, he submitted a 900-page memoir which was published in South America, and in 1958 created an abridged copy which was around 127 pages. The shorter manuscript was titled "La Nuit" or "Night". At first sales were slow, but picked up as the years went on, and now there are many million copies in print. As it became popular, he was approached and turned down a movie offer, believing it would lose its meaning on film.

Family and the Peace Prize

By 1964, his Rabbi encouraged Elie to get married, and within a few years he met Marion Erster Rose. They married around 1969. She was a young mother just recovering from a divorce and had a child from her first marriage (Jennifer). The two of them soon had a child of their own (Shlomo Elisha Weisel). Elie continued to write books, and wrote over 40 books altogether. His wife also became a part of his writing team, translating his books from French to English.

Elie did not believe in remaining silent while inequalities exist in the world. He continued to speak out against violence, repression, and racism and in 1986 was awarded the Nobel Peace Prize for his efforts as Chairman of "The President's Commission on the Holocaust".

Sponsored Search by Ancestry.com
DNA
No known carriers of Elie's DNA have taken a DNA test. 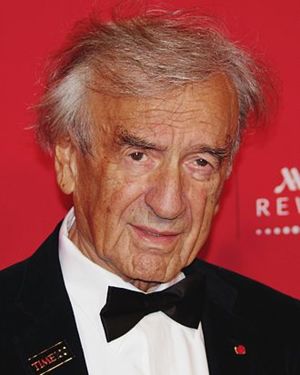 Leave a message for others who see this profile.
There are no comments yet.
Login to post a comment.
Keith McDonald
Hi

we had to rename category to French spelling, can you change Category: Legion of Honor to Category: Légion d'honneur

Ellen Smith
When a biography has any form of a "Private" setting, people who aren't on the Trusted List can't see the connected spouses.

Since I'm on the trusted list, I can see the spouse.

I would have connected her but have no access?