Mrs. Hazel M. (Wight) Oldford, of Melrose, formerly of Watertown, went home to be with her Lord on Tuesday morning, March 10, 2009 at the Bear Hill Nursing Center in Stoneham following a period of declining health. She was 104 years old.

Hazel was born on July 7, 1904 in Bonne Bay, Newfoundland, Canada, a daughter of the late Samuel Wight and Sarah (Earle) Wight. For many years, she lived in Watertown with her late husband, Mac, until moving to Melrose to be closer to her family. A fantastic cook, Hazel very much enjoyed and was proud of being a homemaker.


Memories: 1
Enter a personal reminiscence or story.
Chris Whitten
Elsie (Oldford) Howes wrote, "As a teenager I grew to love my Aunt Hazel, Uncle Mack's wife. I thought it was so wonderful that he built her a nice house in Watertown before they married. They had a hard time of it during the Depression so they rented the downstairs and they took the upstairs so they did not lose the house."
posted 22 Dec 2008 by Chris Whitten
Login to add a memory.
Is Hazel your ancestor? Please don't go away!

ask our community of genealogists a question.
Sponsored Search by Ancestry.com
DNA
No known carriers of Hazel's DNA have taken a DNA test. 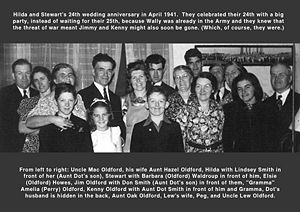